Justice to Launch Bella and the Bulldogs Product

Nickelodeon and tween retailer, Justice, announced an all-new product line inspired by the network’s live-action comedy, Bella and the Bulldogs. As the key marketing launch partner for building brand awareness and as the exclusive licensed retailer through 2015, Justice will be debuting the Bella-branded product line in Justice Stores nationwide in July. The direct-to-retail assortment includes graphic tees, photo-real leggings, sparkly sports duffle bags, and more. In addition there will be jewelry from Fantasia, a plush Bulldog from Gund, and cosmetics from GBG including custom nail art and a lip gloss set.

9 Story Media Group announced that it has entered into an agreement with Beijing Sunshine Culture and Communication Co., Ltd., a Chinese media company. Under the terms of the deal, Sunshine has taken all rights within the territory for the preschool series, Peg + Cat and Daniel Tiger’s Neighborhood.

Both Peg + Cat and Daniel Tiger’s Neighborhood are co-productions with The Fred Rogers Company for PBS Kids. 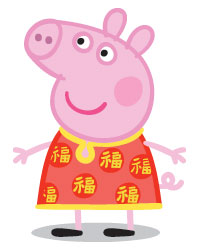 Entertainment One Licensing (eOne) announced that national broadcaster China Central Television (CCTV) has acquired the broadcast rights for Peppa Pig. Peppa Pig will debut on CCTV’s children’s channel CCTV 14 Kids on June 23 and Peppa Pig content will also launch on other VOD platforms. eOne is working closely with CCTV to create dedicated digital content for the Chinese market. This will include an official Peppa Pig website and a range of online promotions that will be hosted on CCTV’s online platforms in support of show’s launch in China.

In a further development for the territory, PPW has been appointed as the licensing agent for the brand in China. With the first partners already signed, PPW is responsible for developing a comprehensive consumer products program for the brand across all key categories. King Bee is on board as the master toy licensee and Penguin China will build the publishing category extensively through bilingual and local languages with variety of formats. Products will launch at all key retail channels in July.

TTPM is showcasing the newest Sporting Goods. For the latest in toy reviews as well as what’s trending, visit TTPM.com.