Film Underway About Inventor of Operation

Game designers Peggy Brown and Tim Walsh have launched an IndieGoGo crowdfunding campaign to raise money to complete a documentary film about the inventor of the game Operation.

Creator John Spinello only made $500 from selling the patent to Operation to a toy development company in 1964. Fifty years later, he found himself in the position of needing an operation of his own that he couldn’t afford. Last fall, Brown and Walsh launched a campaign to raise money to help Spinello get his operation, and an avalanche of support for Spinello poured in. The pair raised over $32,000 with the assistance of over 1,200 backers, to help him get the oral surgery he needed. Now that the first stage of his surgery has been completed, Brown and Walsh hope that fans of the iconic game will come through again, this time with an IndieGoGo campaign to raise $50,000 to continue filming his story.

“During our campaign to help John with his medical expenses, we heard from thousands of people worldwide who love Operation,” Walsh said. “Some of them told us that their love of the game inspired them to become electrical engineers, nurses, doctors, and even surgeons. Then we received a letter from a surgeon at Johns Hopkins Medical School who wrote to tell John that he was inspired by Operation to invent a device that has since been used in nearly a million successful surgeries around the world. That’s when we knew we had to make a movie. The power of play, to inspire and even transform us, is a main theme of the film.”

Watch the IndieGoGo Campaign for the film, Buzz Heard ‘Round the World: The Inventor of Operation and the Power of Play here.

Bob the Builder Is Back

Bob the Builder is returning to PBS in November with a new CGI look for the series and its characters, Bob and Wendy. In addition, Wendy will be voiced by Downton Abbey’s Joanne Froggatt.

Ahead of the PBS television launch, HIT Entertainment, a division of Mattel, launched a Bob the Builder U.S. YouTube channel on August 7 that will feature the release of 40-plus mini adventures leading up to the TV debut. Each of the YouTube shorts will run about three minutes, with new webisodes uploaded on a regular basis. The new episodes featuring Wendy’s new look and new voice will debut on August 21. See the new look here.

Nominations are now open for the 2015 Toy & Game Inventor of the Year (TAGIE) Awards, celebrating the outstanding achievements of inventors, designers, and industry leaders. Through Sept. 1, 2015, toy and gaming industry professionals may submit nominations online here.

Presented by Hasbro, the eighth annual TAGIE Awards will once again honor the masters of toy and game innovation. The 2015 categories now open for public nomination by all members of the toy and gaming industry include:

• Rising Star Inventor of the Year

• Young Inventor of the Year

Finalists for these five categories will be announced on Sept. 15, 2015, at which time voting will open to the general public, media, and industry leaders.

A separate committee of industry experts will determine the honorees for the following closed TAGIE Award categories:

The 2015 TAGIE Awards ceremony takes place Friday, Nov. 20, 2015, at the Grand Ballroom at Navy Pier in Chicago. Guests will enjoy an elegant evening of entertainment that includes a cocktail hour, a seated dinner, and the awards program. Visit TagieAwards.com

Brixy, a trade association for independent juvenile retailers, the Juvenile Product Manufacturers Association (JPMA), and Pregnancy Magazine have teamed up to promote each other’s services this fall in a three-way partnership.

Brixy-affiliated stores say they offer consumers personalized attention. Now two years old, the 280-store association wants consumers to know that help for new parents awaits them right in their region. To get message out to consumers, Pregnancy Magazine will cross-promote Brixy stores along with the magazine’s comprehensive Fall Buyer’s Guide. The Guide features 15 categories with buyer’s checklists in six sections.

Brixy and Pregnancy Magazine will ship 25 copies to each of Brixy’s 280 stores. The stores will offer a complimentary copy featuring the Fall Buyer’s Guide to its customers as a service and “thank you” for shopping at Brixy stores.

JPMA, which is dedicated to promoting the industry and the safe use of juvenile products, will include its Consumer Certification Guide and Registry Checklist for parents to utilize when registering for various juvenile products. The Pregnancy Magazine Fall Buyer’s Guide also identifies JPMA-Certified products.

Look for several digital and print ads in Pregnancy Magazine and its online component this fall to promote the importance of shopping for baby products at Brixy-member stores.

GEMS (Girls Excelling in Math and Science) has been working since 1994 to increase interest in STEM (science, technology, engineering, and math) for girls in elementary and middle school. One of the goals is to expose girls to the fun and wonder of these fields. 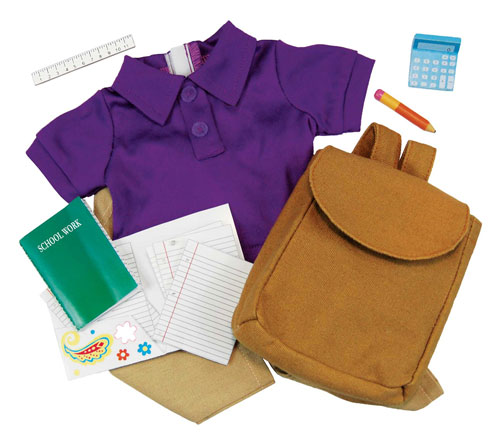 GEMS is now part of a nationwide effort to improve opportunities for girls and under‐served minorities, and has expanded to include experience for girls in the realm of “making,” or helping them to develop confidence, creativity, and interest in science, technology, engineering, math, art, and learning as a whole through “making.” GEMS provides resources for parents, educators, interested adults and girls of all ages to pursue interests and careers in STEM through clubs and individual activities.

Now, Laurent Doll is offering a School Days accessory set to support this effort by encouraging girls with their dolls to pursue the exciting world of STEM. The accessories that accompany the doll’s school clothes and backpack include a book, pencil, paper, ruler, and calculator. A portion of the proceeds from this kit will be donated to GEMS. (Laurent Doll merged with The Queen’s Treasures earlier this year.)

Iconix Brand Group, Inc., reported its financial results for the second quarter and six months ended June 30, 2015, and disclosed an ongoing periodic review of the company’s Form 10-K for the year ended December 31, 2014, with the staff of the Securities and Exchange Commission.

In a separate announcement, made at the end of last week, Neil Cole has stepped down as CEO, chairman, and president. Iconix board member Peter Cuneo has been appointed chairman of the board and interim CEO. Cuneo has served on Iconix’s board since October 2006 and previously was the president and CEO of Marvel Entertainment.

There was no Other Revenue in the six-month period, as compared to approximately $25.4 million of Other Revenue recorded in the prior-year period.

Free cash flow attributable to Iconix for the six-month period was approximately $105.4 million, a 25 percent increase over the prior year period of approximately $84.1 million.

Peter Cuneo, chairman and interim CEO of Iconix, said, “In looking at today’s results I believe the most important take-away is that Iconix’ core underlying licensing business remains healthy and continues to generate significant free cash flow. I am genuinely optimistic about the future of our company and believe that Iconix has significant strengths upon which to build, including its global portfolio of over 35 diversified consumer brands and its profitable business model. I believe the company is well positioned to resume its growth trajectory both organically and through new acquisitions.”

Starting now, Iconix will provide separate revenue guidance in two components, Licensing Revenue and Other Revenue. For the full year 2015, the company expects Licensing Revenue to achieve low single-digit growth, and to be in a range of $410–$425 million. Iconix will continue to look for strategic opportunities and is forecasting approximately $5–$15 million of Other Revenue in 2015. The company is revising its 2015 non-GAAP diluted EPS guidance to a range of $2.00–$2.15, and its 2015 GAAP diluted EPS to a range of $2.24–$2.39. The company still expects to achieve significant free cash flow for the full year and is revising its 2015 free cash flow guidance to a range of $170–$190 million.

The guidance relates to the portfolio of existing brands and does not include any additional acquisitions.

What’s New in Back to School on TTPM

Where did the summer go? TTPM is showcasing the newest items for the Back to School season. For the latest in Toys, Tots, Pets, and More as well as what’s trending, visit TTPM.com.