Discovery Communications announced a partnership with Acme International for a line of pet feeding products under the Animal Planet pet brand, as well as kitchenware under the lifestyle brand.

Both the lifestyle and pet lines will debut in 2013 at a wide variety of retailers. The agreement was brokered on behalf of Animal Planet by its licensing agent, The Joester Loria Group.

ACI International has signed a licensing deal with Razor to create a line of shoes. The complete line will encompass 20 distinct boys’ and girls’ styles. The licensed footwear partnership kicks-off Razor’s strategic plan to extend the brand through lifestyle licensing. Razor is represented for licensing by Perpetual Licensing.

Brandberry has signed Animal Adventure for a line of Beary Sweet products. Under the new agreement, Animal Adventure will create an array of scented plush from pillows to collectible beans to key chains.

Brandberry plans to secure key categories such as edibles, stationery, and apparel.

The Palladium Hotel Group and Blue Socks Media, owner of the Raggs TV series, announced a licensing partnership for the Grand Palladium all-inclusive luxury resorts in the Caribbean and Mexico. Called Play at the Palladium with Raggs, the program is expected to launch next month and will immerse the five colorful Raggs characters into Palladium’s existing kids’ program, which includes mini clubs, character meet-and-greets, dining and musical experiences, activities and live musical stage shows at the resorts’ on-site theaters.

Consumer Strategies, Inc., has brokered a deal for Mexican-branded “dolphin safe” canned tuna endorsed by Earth Island Institute, the non-profit organization that monitors companies to ensure tuna is caught by methods that do not harm dolphins and protect the marine ecosystem.

Consumer Strategies, on behalf of its client Contessa Premium Foods, the environmentally conscious seafood and frozen food manufacturer has licensed El Mexicano to launch canned tuna in the mass and grocery channels. Products are slated for a late fall shelf date.

The WWE has announced the following licensing deals. Bendon Publishing will produce Coloring Activity Books and Puzzle Activity Books. Papercutz has been signed for a line of graphic novels and comic books, including an e-book version. 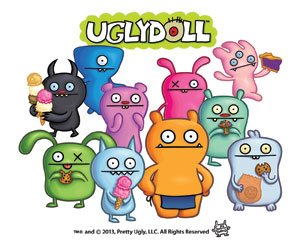 Global Pursuit will work with its extensive network of licensees and retailers in Asia to develop retail programs and enhance the Uglydoll brand experience in categories such as apparel, accessories, stationery, publishing, toys, and many more.

Available in infant, children, tween, and adult sizes, the Man of Steel Costume Collection includes Superman, his Kryptonian father, Jor-el, the villainous General Zod and his second in command, Faora.

Deals for The World of Eric Carle

The Joester Loria Group (TJLG) expands The World of Eric Carle infant and toddler program with two licensees. TJLG brokered a deal with Jaxxwear, Inc., to develop The World of Eric Carle newborn and infant onesies, rompers, and footies in the U.S. and Canada. The collection will include eight body styles per season for both boys and girls. Sizes will range from newborn to 24 months and retail for $34–$48. The collection will launch fall 2013 at department stores and independent retailers throughout the country.

Creative Baby has signed on to develop a line of infant and toddler juvenile products and furniture in the U.S. The World of Eric Carle products by Creative Baby will include high chairs, jumpers, walkers, booster seats, foam table and chair set with interactivity ranging from $40–$130. The collection will launch spring 2014 at mid-tier, specialty, department store, and independent retailers.