Peppa Pig has more than 700 licensees worldwide. The show airs in more than 180 territories and has been translated in more than 40 languages.

FremantleMedia North America (FMNA) is expanding the Baywatch brand, based on the television series, in numerous areas. The company has recently announced several new partnerships surrounding Baywatch. Among the new partners that have come on board to create programs surrounding the Baywatch brand is Hybrid Apparel, who will be creating a line of men’s, women’s, and junior’s apparel and accessories. American Classics will be creating a line of graphic tees based on the TV series. In addition, Funko has signed for stylized vinyl figures and Smiffys is licensed for Baywatch Halloween costumes.

In the gaming space, IGT is launching a Baywatch 3-D video slot machine that will feature IGT’s TRUE 3D technology and transport players to some of the most iconic beach scenes in a glasses-free 3-D gaming environment.

Sonic the Hedgehog is celebrating 25 years and to mark this milestone, SEGA has lined up an international slate of new licensing partners to support the franchise through 2016 and beyond.

KidRobot will create collectible, art, and keychain figures for the Americas and EMEA markets. Other art initiatives include a global collaboration with Cook & Becker, will launch a range of high-end 25th anniversary limited-edition prints. Party City joins Sonic with a celebration that includes party goods, balloons, and costumes in North America. Concept One also joins the roster in North America with headwear and cold weather accessories. Skuzzles, out of North America, and Iron Gut out of the UK, are bringing limited-edition prints to their respective markets. Drop Dead Clothing Ltd. introduces the UK to products ranging from tracksuits and bags to T-shirts and bomber jackets. Love and Madness will introduce jewelry, hair accessories, and cosmetic bags in North America.

In addition, SEGA has teamed up with Amazon.com for a homepage takeover offering deals and custom merchandise. For mobile gamers, players can jump into Sonic Dash on Amazon Underground for a chance to win prizes by collecting special Amazon Boxes in-game. This promotion is exclusive to Amazon Underground.

Attendees of the San Diego Comic-Con fan celebration will to gain access to exclusive, limited-edition products from New Era, TOMY, and Archie Comics.

Licensing Program in Development for Tiniez

Richmond Management Group (RMG), representing Tiniez, announced the signing of toy and apparel licensees for a fall 2017 launch. Tiniez is an aspirational lifestyle brand that empowers girls around the world to be themselves, make their mark, and follow their dreams. With over 100 unique adorable characters each with her own aspiration and backstory, Tiniez models a world where no dream is too big and no girl is too small.

Jazwares is the master toy licensee and will be developing collectibles and plush, which is expected at retail in fall 2017. Jazwares will support Tiniez with their extensive network of social media influencers to focus on growing the digital footprint of the brand.

Kandy Kiss is developing a 30-40 piece apparel collection including tees, fashion tops, hoodies, leggings, skirts, rompers, and dresses. In addition, Palamon Costumes (a division of Li & Fung) will be introducing a select group of Tiniez characters chosen by Tiniez fans next Halloween highlighting their individual passions such as fashion, science, music, dance, and animals.

Home décor from Jay Franco & Sons will be available beginning in 2018 including a wide range of bedding, bath, and beach products. Digital stickers are available now through Bare Tree Media.

A Tiniez YouTube series featuring DIY videos and tutorials will launch this summer with support on PopJam—the leading social content app for kids in the UK, which launches in North America (U.S. and Canada) this summer. PopJam is a wholly owned platform of SuperAwesome, the largest kids digital media platform in the world. 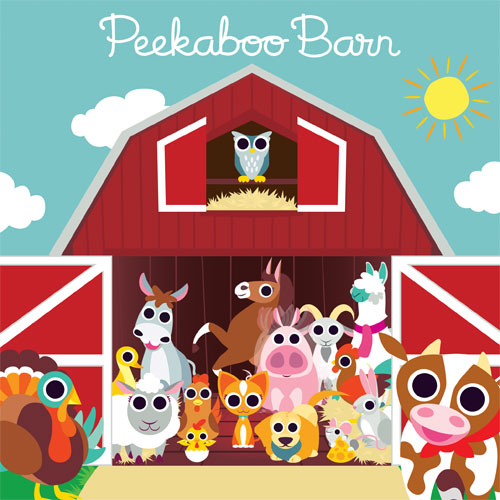 Night & Day Studios, one of the leading makers of children’s apps globally, has awarded the board game license for its flagship preschool brand, Peekaboo Barn, to Educational Insights. The Peekaboo Barn board game will debut in early 2017 and will include the most popular characters from the original Peekaboo Barn app, a bestseller since 2008, and its sequel app, Peekaboo Barn Farm Day. Based on a Bedtime at the Barn story and gameplay concept by Night & Day Studios, Educational Insights is designing the board game to promote development of social, cognitive, language, and physical skills in early childhood.

Educational Insights joins licensees Candlewick Press, Rich Frog, and Zazzle in the growing Peekaboo Barn consumer products program. The brand made its first foray into non-digital form with a successful Candlewick Press board book with flaps in fall 2014. Additional products from these licensees will be out in 2017.