Fans of Where’s Waldo can now seek and find the red-and-white stripe-wearing character on their phones through licensed mobile games and iPhone apps thanks to Classic Media, which represents the property. As of April, 1 million Where’s Waldo apps had been sold for the iPhone and iPod Touch. Nicole Blake, who was recently promoted to executive vice-president, global marketing & consumer products at Classic Media, talked about bringing Waldo to cell phones and why this venture makes sense for licensing.

Laurie Leahey: Licensing has now evolved to include licensed mobile games and iPhone apps. How are agencies and brand owners approaching this new digital space?

Nicole Blake: What’s so key is that it’s not a question of what’s your online strategy or what’s your digital strategy. It’s now part of what’s your strategy. It’s not separate to the strategy or an adjunct. It’s looked at with all the other traditional media. It’s really in every brand discussion—apps, social network—all those things are at the table at the beginning of your brand planning. And sometimes, as in the case of Waldo, they’re actually the lead in your brand plan.

L.L.: So what was the strategy behind bringing Where’s Waldo to mobile games and iPhone apps? 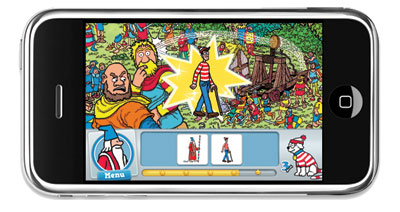 N.B.: The strategy is to take Waldo and the Waldo play pattern, which is search-and-find, off the pages of the books and translate it into any and all other media.

The mobile and iPhone apps were part of this larger strategy. We started by rolling out websites and social networking pages like on Facebook and other key social networks. We then put in place plans for video games, online games and, as part of that strategy and rollout, mobile games. The first thing was literally to build an infrastructure. We wanted a built-in network so that when we created the mobile games and iPhone apps there was a built-in network to market to.

L.L.: Is there a demographic that works best for this type of licensing?

N.B.: We’re in a very unique position because Where’s Waldo came out in 1987 and was very big in the early ’90s. The people that were kids when Where’s Waldo first hit really big in the ’90s are now college kids or in their 20s, and they are also the key demo that has really embraced all this new media.

L.L.: So what’s next for Waldo? Will Classic Media bring other characters to the mobile space?

N.B.: This summer we’ll be launching the second mobile game and the second mobile app [for Waldo]. Our tentpole for the summer is Where’s Waldo in Hollywood, which is one of the books, and so everything is themed [based on that].

We have several other properties that are on deck to follow based on the success of Where’s Waldo, but we can’t talk about them yet.