Earlier this year, Sony Online Entertainment released DC Universe Online. As publisher and developer of the game for PC and PS3, Sony is immersing fans in the DC world.

The tagline is “YOU are the Next Legend,” as players navigate through their own story fighting to save or rule the DC Universe. Of course, players can don the guises of well-known DC characters in this 30-level game. The game is rated T for Teens, meaning it depicts mild blood, language, violence, and mildly suggestive themes.

Sony Online Entertainment explained some of the marketing and licensing efforts that are underway for the game.

Nancy Lombardi: How does the DC Universe storyline and characters fit in with the rest of DC’s properties? 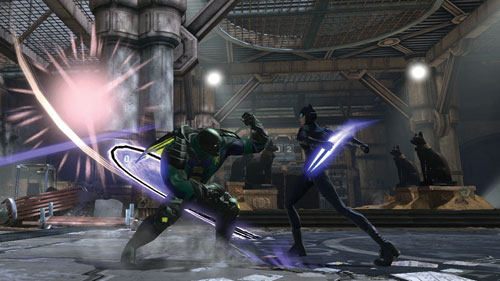 DebySue Wolfcale: DC Universe Online (DCUO) is the idealized version of the DC Universe. With more than 75 years of stories to pull from, it was difficult to choose which aspects of the universe we wanted to incorporate into the game. In the end, we settled on the “ideal” version of the DC Universe—where Bruce Wayne is Batman and Clark Kent is Superman—as a baseline so casual players could immediately relate to the game. Offering players this version of the DC Comics world gives us lots of options. Most importantly, as DC Comics continues to expand both in traditional media and into digital media, DCUO can work cooperatively with their teams to connect game play updates to new stories as they are conceived. Even more advantageous for us is that Jim Lee is the executive creative director for DCUO and the co-publisher for DC Comics, and in that dual role he is a great advocate for DCUO in ensuring that the game stays in sync with key DC Comics. We hope that in time we can connect the fans digitally from the game to comic book storylines to digital comic themes and back again.

For fans, the ability to become part of these rich story-driven adventures, to roam the streets of Metropolis and Gotham City, and to control the powers of the DC icons is incredibly exciting and makes for a really fun action game. It gives us a lot of great content to bring to life for months and years to come, which is exactly what we plan to do.

N.L.: What marketing and/or licensing efforts are planned for the game?

D.S.W: DCUO has the benefit of working as a partner with both DC Comics and Warner Bros. Entertainment—two very prolific companies in their fields. Already, DC Direct has announced it is producing a line of statues based on the iconic characters from the game. Warner Home Video has included DCUO cinematic trailers on its DC Comics DVD releases. There are also other licensing deals with some of the Sony companies, including a DCUO bundle with the VAIO F Series Laptop Gaming Bundle available now. Our goal in terms of licensing is to bring great products to our fans and players from premiere companies that deepen the bond our players have with the game.

N.L.: Why is now the right time to bring DC brands to the MMORPG world? 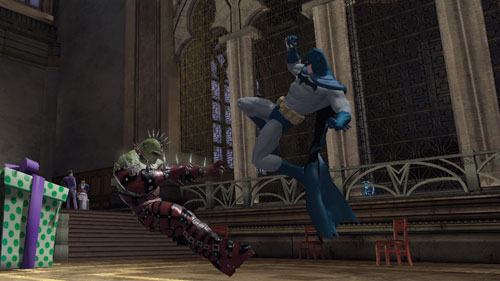 D.S.W: As gamers and fans of the MMORPG genre, the timing felt right to bring the extremely popular genre of the massively multiplayer online games to the broader market by creating an innovative new style of game, the massive online action game. We wanted to develop a game that featured fast-paced action, visceral combat, and combo moves along with the type of intense physics-based fighting abilities that gamers love in the best of the console action games. And, we wanted to marry that type of action with the game play mechanics that make MMO games so popular—the social game features, such as the ability to create lucrative alignments with other players and build powerful DC-style superheroes and villains that progress to become increasingly more powerful and more customized and who fight alongside and against the legendary DC Comics icons like Batman, Superman, and The Joker. The exponential growth of MMO games on PC fueled our excitement along with our love of playing on the console. We felt that now was the right time to bring these two worlds together, and the PS3 was the right console on which to introduce this type of game. Most of the gamers and fans that we have met at events over the past few years are as excited to play this game on the PC as they are to play from their couch on their big screen on the PS3. To us, it was a win-win combination for the platforms, the players, and the DC Comics fans.

N.L.: What does the DC Universe Online bring to fans that your other brands and properties do not offer?

D.S.W: DC Universe Online introduces a lot of firsts into the massively multiplayer game space. First, we offer our fans the ability to play an MMO/action game, two game play features that are not normally combined and that is a fairly unique combination right now, on the PC or PlayStation3—a first. And, if that is not enough, we built the game with a game play style based on fast action that forces the gamer to stay engaged in the moment-to-moment action—forging a really strong bond between the player and his character.

In DCUO, every time you hit a key on the keyboard or you push a button on the controller your character strikes a blow. You are in control of every move your character makes, not a dice roll and not some algorithm. This is a level of connectivity to the character that is simply not seen in most MMO games today. Plus, DCUO’s real strength is the brand IP and how true we are to the type of experience you expect in a superhero world. The way we present the DC Universe, the players will feel as if they have literally stepped into the DC Universe. We deliver the type of over-the-top combat that you would expect from a DC superhero game.