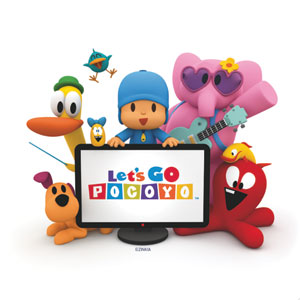 Zinkia Entertainment named Evolution Management Group, Inc., (EMG) as its U.S. licensing agent for the multimedia property Pocoyo. EMG specializes in global brand and IP development, and will work to secure new merchandising, licensing, and promotional opportunities for Pocoyo. Travis J. Rutherford, CEO and co-founder of EMG, will develop new strategic licensing partnerships and spearhead the retail development for Pocoyo consumer products, while Adam Unger, the firm’s president and co-founder, will oversee product development and promotional opportunities for the brand.

Ubisoft announced a licensing agreement with Nickelodeon to bring a new television series based on Ubisoft’s Rabbids brand to audiences around the world. As part of the deal, Nickelodeon secured global broadcast rights (excluding France) for 78 seven-minute CG episodes to be produced by Ubisoft, which Nickelodeon will package and air as 26 half-hour episodes across its channels worldwide (excluding France) beginning in 2013.

In a nationwide effort to combat childhood obesity and to support First Lady Michelle Obama’s Let’s Move! initiative, Kidz Bop joined forces with the Ad Council to help launch The Greatest Action Movie Ever (G.A.M.E) campaign. Created by McCann New York, the campaign includes new public service advertisements (PSAs) and online initiatives that promote physical activity and healthy eating among kids ages 6–12. Kids can audition for a role in G.A.M.E, an original short movie premiering in spring 2012, by uploading a video to KidzBop.com between now and November 30. Kids will vote on the audition videos, and the winners will receive prizes that promote healthy habits, such as Wii game consoles, bikes, and athletic equipment. A panel of judges will select the best videos, and the kids in those videos will have a starring role in the G.A.M.E. movie. KidzBop.com will also host special digital PSAs starring the Kidz Bop Kids to encourage kids to get moving and make healthier food choices.

Activision and Toys “R” Us unveiled the game on October 8 with full game demos and interactive game kiosks in more than 1,200 retail locations across the globe. Following the game’s U.S. launch on October 16, players can purchase Toys “R” Us exclusives, such as three Skylanders Legendary characters, which feature accompanying in-game skins and power-ups. The retailer will also be the only place to purchase the Skylanders Spyro’s Adventure Darklight Crypt Adventure Pack in its first 30 days on the market, from October 16 through November 15.

Skylanders Spyro’s Adventure allows kids to bring a vast collection of physical toys to life in the game. Place one of more than 30 different characters onto the Portal of Power—yours or a friend’s—and the characters show up within the game world, all customizations and powers intact. The game is rated E10+ by the ESRB.

Jack Spade, the men’s brand known for its American styling of apparel, bags, and small goods, teamed with Coca-Cola to celebrate the soda brand’s 125th birthday. Jack Spade released a limited-edition collection of T-shirts, totes, baseball caps, posters, and iPhone covers. The new collection takes its design cues from memorable Coca-Cola campaign slogans, such as “It’s the Real Thing” and “I’d Like to Buy the World a Coke.” It is available in all Jack Spade stores, at www.jackspade.com, and in select specialty stores.