“We are pleased with our financial results for the third quarter during which we completed our $100 million convertible senior note financing,” said Stephen Berman, president and CEO of Jakks Pacific in a statement. “During the quarter, we sold a broad array of products including Disney Princess dolls, dress-up, and roleplay, Sofia the First dress-up and roleplay items, Disguise Halloween costumes, 31-inch Giant Action Figures, foot-to-floor ride-ons and kids furniture.”

He continued. “We recently completed our Fall Toy Preview meetings and are pleased with the enthusiastic response from retailers, licensors, and other industry partners to our 2014 product lineup, particularly the reaction to our new line of technology-driven toys. We anticipate these toys will provide children with a new and heightened play experience by combining our strong lineup of physical toys with DreamPlay iD technology and enhanced augmented reality content, all of which will come together in new and exciting apps. Looking ahead to 2014, as Jakks approaches its 20th year in business, we are looking forward to returning Jakks to profitability. We expect to achieve this by continuing to offer new and exciting products, continuing to spend on technology and content, and by realizing the benefits of our previously announced restructuring plan, which has resulted in the reduction of our head count of employees and will reduce leased space and other overhead expenses,” said Berman. 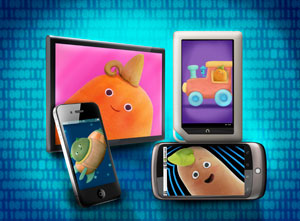 Little Airplane Productions has partnered with plush manufacturer Animal Magic for a joint initiative that will see the Small Potatoes characters become part of Animal Magic’s newly formed F2C business, which produces customized soft toys delivered directly from the factory to the consumer.

In-store shoppers can participate in the hands-on Build-A-Bear Workshop stuffed animal-making experience, which has been enhanced with digital technology. Build-A-Bear worked with Microsoft, Samsung, and other leading technology companies to create the store design, which includes a touch-screen storefront display.