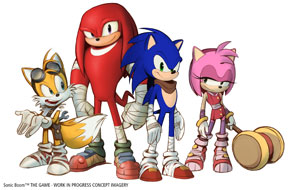 Last week SEGA introduced a major new initiative for Sonic called Sonic Boom. It encompasses a new look for Sonic and friends, the launch of their first-ever CG-animated television series, new video games for the Wii U system and the Nintendo 3DS handheld system, and a new toy line from master toy licensee TOMY.

The worlds of the TV series and video game will share a common narrative and a number of location and stylistic similarities reflecting full collaboration between video game, TV series partners, and SEGA from the outset.

The Sonic Boom television series, co-produced by SEGA of America, Inc., and OuiDO! Productions, will debut on Cartoon Network in the U.S. and on Canal J and Gulli in France during the 2014/2015 season. The series is 52 x 11-minute stand-alone episodes.

Serving as a prequel to the stories revealed in the TV series, the Sonic Boom video game will deliver a different experience from previous Sonic games with collaborative gameplay at its core. Developed in the U.S. by California-based Big Red Button Entertainment (Wii U) and Sanzaru Games (Nintendo 3DS) in collaboration with the Sonic Team, this is the third title to be released as part of an exclusive deal with Nintendo.

Sonic Boom will be supported by a global licensing and merchandising program, anchored by new master toy partner TOMY. TOMY will develop a comprehensive toy range across a broad number of categories including plush, action figures, R/C, roleplay, vehicles, and novelty.

Sonic the Hedgehog first appeared as a video game character in June 1991. There have been more than 140 million video games sold or downloaded worldwide across consoles, PCs, mobile phones, and tablets since that time.

“Our heightened focus on Hasbro’s Franchise Brands and emerging markets delivered positive momentum for us in 2013,” said Brian Goldner, Hasbro’s president and CEO. “In 2013, our Franchise Brands grew 15 percent with six of the seven brands growing, the Girls category increased 26 percent to reach a record $1 billion in revenues, our Games category posted 10 percent growth and our emerging markets increased 25 percent year-over-year. Cost savings efforts are lowering our underlying cost base and the increase in the quarterly dividend reflects confidence in our ability to profitably grow Hasbro over the long-term. We are entering 2014 with very good momentum in our brands globally, innovative new products and a multi-year pipeline of extremely strong film and television entertainment to leverage.”

U.S. and Canada segment net revenues were $2.01 billion compared to $2.12 billion in 2012. The segment’s results reflect growth in the Girls and Games categories, which was more than offset by declines in the Boys and Preschool categories. The U.S. and Canada segment reported operating profit of $313.7 million, or 15.6 percent of revenues, compared to $319.1 million, or 15.1 percent of revenues, in 2012.

International segment net revenues grew 5 percent to $1.87 billion compared to $1.78 billion in 2012. 2013 revenues include a positive $7 million impact from foreign exchange. Revenue in the International segment reflects growth across all regions with Europe increasing 3 percent, Latin America up 12 percent and Asia Pacific growing 4 percent. Emerging markets grew 25 percent in 2013 versus 2012. Additionally, the Girls, Games, and Preschool category revenues increased, more than offsetting the decline in the Boys category. The International segment reported a 9 percent increase in operating profit to $235.5 million, or 12.6 percent of revenues, compared to $215.5 million, or 12.1 percent, in 2012.

For the full-year 2013, net revenues in the Boys category decreased 22 percent to $1.24 billion. 2013 revenues grew for Franchise Brands Transformers and Nerf; however, these gains were more than offset by declines in Beyblade and Marvel products, which had difficult comparisons versus 2012.

The Games category grew for the second consecutive year and fifth consecutive quarter. Franchise Brands Magic: The Gathering and Monopoly posted revenue gains in 2013 versus 2012. Additionally, excluding the growth from the two Games Franchise Brands, the remainder of the Games category grew in 2013 led by Games Mega Brands and new gaming initiatives.

The Girls category posted its sixth straight quarter of growth and reported $1 billion in revenues for the year, a record level for Hasbro’s Girls business. The continued growth in Furby and Franchise Brand My Little Pony was further supported by highly successful new initiatives including My Little Pony Equestria Girls and the launch of Nerf Rebelle.

Cost Savings Initiative & Other Charges
As previously announced, the company is undertaking a cost savings initiative designed to better align resources and costs while targeting $100 million in annual savings by 2015. Gross savings for 2013 totaled $50 million, resulting in net savings of $13 million for the full-year, prior to pension charges.

Additionally, Hasbro repurchased a total of 2.3 million shares of common stock during 2013 at a total cost of $102.5 million and an average price of $45.17 per share. At year-end, $524.8 million remained available in the current share repurchase authorizations. 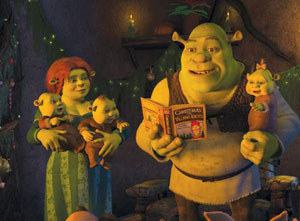 DreamWorks Animation announced the launch of DreamWorks Press, an in-house operation, which will publish digital and print books inspired by the studio’s IP library. The newly formed division will also join with The Perseus Books Group for the sale and distribution of its digital and print books through Perseus’ Publishers Group West distribution unit.

DreamWorks Press signals the studio’s first-ever, year-round publishing program to establish permanent shelf space across top retailers as well as deliver content through a diverse range of formats and price points. The department will be run by Emma Whittard, an 18-year veteran of kids’ publishing including eight years with Disney, and supported by DreamWorks Animation’s head of franchise, Shawn Dennis, who previously oversaw publishing for American Girl. The in-house staff will produce digital and print books, along with book apps featuring DreamWorks Animation franchises including Kung Fu Panda, Madagascar, Shrek, and the upcoming B.O.O.: Bureau of Otherworldly Operations, as well as assets from the DreamWorks Classics portfolio and recent acquisition AwesomenessTV.

The first wave of books from DreamWorks Press is expected to launch in time for the 2014 holiday season. DreamWorks Animation will also build an international team within the publishing arm.

TimetoPlayMag.com is showcasing what’s trending in each specific product category. Today it’s PLUSH. This trending list is determined by consumers. It’s the number of page views for that item in the previous 30 days and is updated every 24 hours.