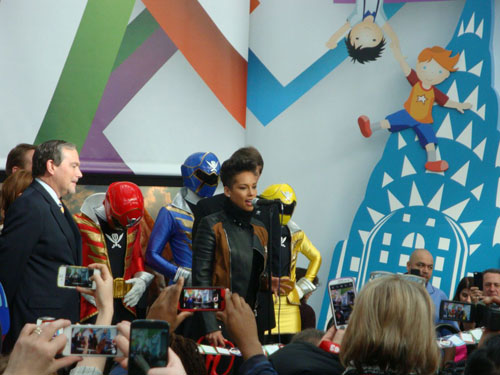 The Toy of the Year (TOTY) Awards were announced on Saturday night just prior to the start of this year’s Toy Fair. The winners are as follows:

The Jim Henson Company has optioned the rights to author Randi Zuckerberg’s debut picture book, Dot. The book was recently published by Harper Collins, and is illustrated by Joe Berger. The company plans to develop the property into an animated television series targeting children ages 5–9.

In this new picture book, Dot is a spunky little girl well versed in electronic devices. She knows how to tap . . . to swipe . . . to share . . . and she pays little attention to anything else, until one day Dot sets off on an interactive adventure with the world surrounding her. Dot’s tech-savvy expertise, mingled with her resourceful imagination, proves Dot really does know a lot.

Henson says that this property teaches kids how to be digital citizens; to encourage technology to be a part of their lives in a creatively fulfilling and positive way. Henson says it intends to produce a fun and forward thinking series that encourages the combination of a child’s traditional play and digital experiences.

Author Randi Zuckerberg is also editor-in-chief of Dot Complicated, a modern lifestyle community and blog. She was an early employee of Facebook (and is the sister of Mark Zuckerberg) where she pioneered live streaming initiatives and struck deals with ABC and CNN.

Joe Berger is a children’s author, illustrator, and cartoonist.

Results from a national survey of more than 2,600 independent business owners conducted by the Institute for Local Self Reliance in partnership with the Advocates for Independent Business coalition—of which the American Specialty Toy Retailing Association (ASTRA) is a founding member—report positive sales news for holiday 2013. The survey found that shop-local initiatives such ASTRA’s annual Neighborhood Toy Store Day are boosting customer traffic. Other key findings show:

• Buy Local—More than 75 percent of businesses located in cities with active Local First campaigns reported increased customer traffic or other benefits from these initiatives. They also reported sales growth of 7 percent on average in 2013, compared to 2.3 percent for independent businesses in places without such an initiative.

• Internet Sales Tax—More than three-quarters of independent retailers said that the fact that many online companies are not required to collect sales tax had negatively impacted their sales, with 41 percent describing the level of impact on their sales as “significant.”

TimetoPlayMag.com is showcasing what’s trending in each specific product category. Today it’s GIRLS TOYS. This trending list is determined by consumers. It’s the number of page views for that item in the previous 30 days and is updated every 24 hours.