Hastings Entertainment, Inc., a U.S. regional multimedia entertainment retailer, reported that it has entered into an agreement and plan of merger with Draw Another Circle, LLC and Hendrix Acquisition Corp., which are each wholly owned by Joel Weinshanker, president and sole shareholder of National Entertainment Collectibles Association, Inc., (NECA), which holds approximately 12 percent of Hastings’ outstanding shares. Hastings will survive the merger as a wholly owned subsidiary of Draw Another Circle, which is considered the parent company, and each share of Hastings common stock held by a shareholder of Hastings (other than Mr. Weinshanker and his affiliates) will, upon completion of the merger, be converted into the right to receive a cash payment of $3.00 per share.

“NECA is a significant supplier of movie, book, and video game merchandise and collectibles to the Hastings superstores, and we’ve had a close and growing business relationship with Mr. Weinshanker over the past decade. Mr. Weinshanker, through his affiliation with the estates of Marilyn Monroe, Elvis Presley, and Muhammad Ali, and his company’s management of Graceland, is one of the leading drivers of the lifestyle industry, and we believe Hastings’ business will continue to benefit from our relationship with him and NECA,” said John H. Marmaduke, Hastings’ chairman and CEO, in a statement. 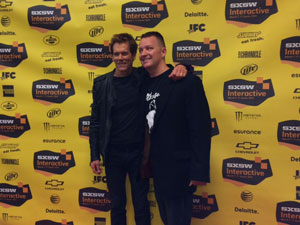 Endless Games’ Brian Turtle hosted Six Degrees of Kevin Bacon: A Social Phenomenon Turns 20 at South by Southwest (SXSW) in Austin, Texas. A crowd turned out for this special session where Bacon was the star of the show celebrating this social phenomenon. Created by three college students (one of which was Endless Games’ Turtle) in 1994 at Albright College in Penn., Six Degrees of Kevin Bacon has thrived over two decades to include a best-selling book, board game, app (The Oracle of Kevin Bacon), a charity (SixDegrees.org), and was most recently added to the Google search tool (The Bacon Number). Shown here is Kevin Bacon and Brian Turtle.

TTPM.com is showcasing what’s trending in each specific product category. Today it’s Roleplay Toys. This trending list is determined by consumers. It’s the number of page views for that item in the previous 30 days and is updated every 24 hours.