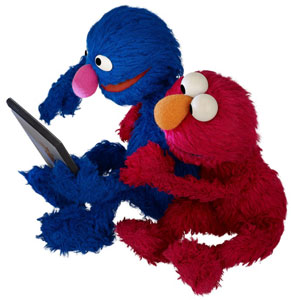 Sesame Workshop and ToyTalk have signed a two-year research partnership agreement to explore the potential for conversation between children and the characters they love, to advance literacy learning among preschool-aged children. The research is designed to address questions of interest to both parties, and to develop best practices that will inform a variety of future products and services.

The partners will utilize ToyTalk’s proprietary PullString Technology, an authoring environment for building speech-driven games and stories with interactive characters. The two organizations are investigating how speech recognition can be a powerful tool for learning, engagement and social development.

China-based Guangdong Alpha Animation and Culture Company Ltd, one of the world’s largest developers of animation and toys, has announced the creation of Auldey Toys North America and the launch of its new headquarters in Boston, Mass.

The creation of the Auldey Toys subsidiary comes as the company prepares for 2015, surrounding new product innovation in its established boys, R/C, and vehicles lines.

In addition to new products, Auldey Toys will launch its first North American preschool animated program Super Wings, which will begin airing in 2015.

Industry veteran Adrian Roche has been appointed as the company president. Roche joins Auldey Toys after eight years as vice-president of brands at MEGA Brands and previously vice-president at The First Years (TOMY).

“While third quarter results did not meet our expectations, they do reflect progress toward achieving our goal to end the year with improved POS momentum and reduced inventory levels,” said Bryan G. Stockton, Chairman and CEO of Mattel. “Global POS was positive in the quarter, and inventories at retail, both in the U.S. and in international markets, were lower. Clearly we have work to do as we enter the fourth quarter, and we remain focused on executing during the all-important holiday season and beyond.”

For the quarter, net sales were $2.02 billion, down eight percent compared to $2.21 billion last year. On a regional basis, third quarter gross sales decreased seven percent in the North American region, which consists of the U.S., Canada, and American Girl, with no impact from changes in currency exchange rates. For the international region, gross sales decreased seven percent including an unfavorable impact of currency exchange rates of one percentage point. Operating income for the quarter was $409.5 million, compared to prior year’s operating income for the quarter of $528.2 million. Mattel’s debt-to-total capital ratio as of September 30, 2014 was 41.2 percent.

The company announced that its board of directors declared a fourth quarter cash dividend of $0.38 per share on the company’s common stock. The dividend will be payable on December 12, 2014 to stockholders of record on November 26, 2014. The dividend is the final of four quarterly dividends the company will have paid this year, reflecting an annualized dividend of $1.52 per share, which represents a six percent increase to last year’s total dividends.

Third quarter worldwide gross sales for Fisher-Price Brands, which includes the Fisher-Price core, Fisher-Price Friends, and Power Wheels brands, were $663.4 million, down 16 percent versus the prior year.

Third quarter gross sales for American Girl Brands, which offers American Girl-branded products directly to consumers, were $113.3 million, down seven percent versus the prior year.

“Our third quarter results continued to reflect the momentum we are building in our franchise brands and key partner brands, the positive results of our investments globally and the benefits of leading with compelling content and storytelling,” said Brian Goldner, Hasbro’s president and CEO. “In the third quarter, we grew revenues across all operating segments, delivered improved profitability, and took strategic steps to grow our brand portfolio and content delivery over the longer term, including forming a new strategic merchandising relationship with Disney Consumer Products for the globally popular Disney Princess and Frozen properties.”

U.S. and Canada segment net revenues increased four percent to $764.3 million compared to $735.6 million in 2013. The segment’s results reflect growth in the boys and games categories, partially offset by a decline in the girls and preschool categories. The U.S. and Canada segment reported operating profit growth of 16 percent to $169.9 million versus $147.0 million in 2013.

Entertainment and Licensing segment net revenues increased 10 percent to $53.4 million compared to $48.6 million in 2013. The segment benefited from growth in lifestyle licensing. The Entertainment and Licensing segment reported operating profit of $0.5 million compared to $7.6 million in 2013, primarily due to the impact of the acceleration of certain programming amortization costs.

Games category revenues increased two percent in Q3 to $395.2 million. Franchise Brands Magic: The Gathering and Monopoly grew in Q3, as did Simon Swipe and Operation. These gains were partially offset by declines in several brands, including Telepods featuring the Angry Birds Star Wars II game, Jenga, Bop-It, and Duelmasters.

Preschool category revenues decreased seven percent to $188.5 million in Q3 2014. Play-Doh and Transformers Rescue Bots revenues continued to grow but were more than offset by declines in other preschool initiatives, including core Playskool and Sesame Street products.

As a result of restructuring the company’s investment in the Hub Network joint venture, Hasbro recorded a pre-tax charge of $11.6 million, or $0.06 per diluted share, in the third quarter 2014. This net charge is primarily related to the costs associated with recording the fair value of a put/call option exercisable at the end of 2021 that the Company and Discovery entered into related to this transaction.