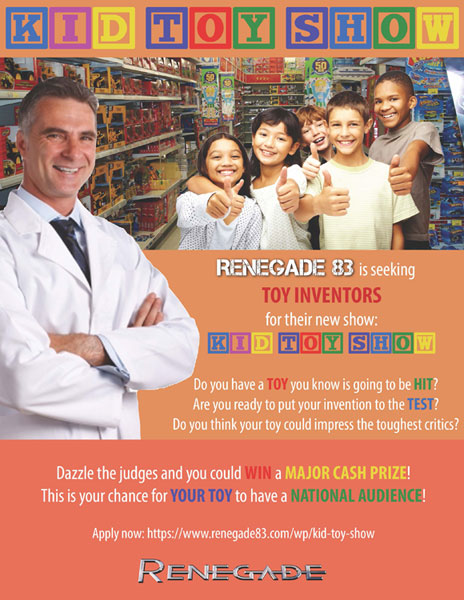 Renegade 83 Studios is a production company that is seeking Toy Inventors and kids for a new major cable network show. They are looking for inventors of all backgrounds along with toys of any kind. Renegade says, “The toys need to excite and inspire kids to play—whether it is for learning or for fun.”

Interested candidates can email KidToyShowCasting@gmail.com or call (818) 480–3112 (ask for casting) for more information. The deadline is Wednesday October 21.

Consumers celebrating Halloween plan to spend an average of $27.33 on costumes for the whole family, and a total of $2.5 billion on store-bought and homemade costumes. Those celebrating will spend the most on adult costumes ($1.2 billion), and will spend a total of $950 million on children’s costumes and $350 million on pet costumes. It’s estimated that 68 million Americans will dress up this Halloween and another 20 million pet owners will dress up their pet. Minions and Star Wars are among the top costume choices for kids, adults, and pets.

Nine in 10 (93.7 percent) Halloween shoppers will buy candy, spending a total of $2.1 billion, and an additional 33.5 percent will buy greeting cards, spending a total of $330 million. Two in five celebrants (44.8 percent) decorate their home or yard. The average person planning to buy decorations will spend $20.34 with total spending expected to reach $1.9 billion.

When it comes to how consumers plan to celebrate, most will hand out candy (67.8 percent), or dress in costume (43.5 percent), and 41 percent of people plan to carve pumpkins. Nearly one-third of consumers (31.5 percent) plan to throw or attend a party with friends and family.

More consumers have decided to head to stores or shop online early to pick out costumes and decorations. More than one-third of consumers (34.1 percent) started their Halloween shopping before the first of October, up slightly from 32.1 percent last year, while 40.9 percent got started in the first half of the month and one-quarter (25 percent) of celebrants will wait for the final weeks of October.

Similar to past years, the majority of consumers will find inspiration for their costumes online (31.4 percent) or will head to costume shops and retail stores (26.8 percent). Pinterest continues to grow in popularity among those looking for costume inspiration (13.3 percent), as this year’s percentage is nearly double the amount who used the site for inspiration just three years ago (7.1 percent). Millennials remain the drivers of Pinterest traffic around Halloween with 24.9 percent of 18-24 year olds and 23.7 percent of 25-34 year olds using the site for costume inspiration.

The Toy Industry Foundation (TIF) launched a fundraising campaign that will put new, donated toys into the hands of children in need this holiday season. Dubbed #MyToyMemory, the interactive campaign leverages social media and consumer nostalgia to raise a minimum of $50,000 in support of TIF programs that provide toys to children who are ill, impoverished, rescued from abuse, or otherwise in need.

The winning campaign, developed by Mattel, was selected for its ability to strike an emotional chord with consumers, encourage donations to TIF, and raise awareness about the Foundation’s mission in a fresh and innovative way. Toy companies Crazy Aaron’s Putty World and LEGO came in second and third place, respectively. Each of the top three companies will receive a grant in their company’s name to a children’s charity in their local community.

#MyToyMemory inspires toy lovers of all ages to share their favorite toy memories on Facebook, Instagram, and Twitter, and to visit CrowdRise.com to make a financial donation that will help TIF bring new toys to kids in need during the holidays. Throughout the campaign, Mattel will match every dollar donated (up to $25,000), and other toy manufacturers and entertainment companies will be encouraged to match donations from consumers whose #MyToyMemory is associated with their brand.

TTPM is showcasing the newest Halloween Costumes & Products. For the latest in Toys, Tots, Pets, and More as well as what’s trending, visit TTPM.com.