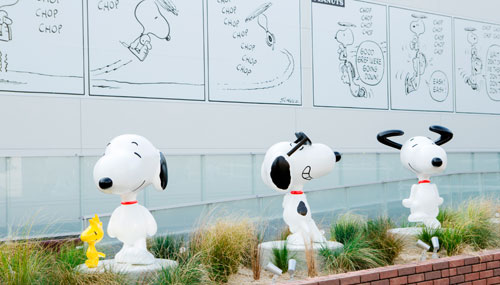 Once every six months until September 2018, Snoopy Museum Tokyo will hold exhibitions displaying original comic strips and other artworks from the collection of the Charles M. Schulz Museum.

About 150 items, including original comic strips that Mrs. Jean Schulz loves, will be on display at the opening exhibition My Favorite Peanuts. In addition to exhibitions, Brown’s Store, a museum store that will sell exclusive goods, and Cafe Blanket, which will serve food and beverages with a West Coast twist, will be main features at the museum.

Just like the Charles M. Schulz Museum, Snoopy Museum Tokyo will show the achievements and personality of Charles M. Schulz, the creator of Peanuts, through changing exhibitions, coordinated events, and workshops.

Freeman Public Relations announced that is has been named public relations Agency of Record (AOR) for Playmobil USA. As AOR, Freeman will increase awareness of the Playmobil brand through an integrated mix of special events, influencer outreach, and strategic media relations.

Coyne Public Relations announced that it has been selected as the agency of record for Babiators, a children’s retail brand specializing in accessories for babies and kids. Coyne will provide public relations strategy for the growing brand and its products. Coyne is tasked with elevating awareness around the Babiators brand and their product suite including signature Babiators Aviator Sunglasses and Aces Aviator and Navigator Shades. The agency will continue to build awareness through traditional media relations, blogger engagement, and creative activations to broaden the reach of the brand’s messages, which includes an emphasis on the education and awareness of the importance of sun safety for children’s eyes. Babiators, celebrating its fifth birthday next month, has sold more than one million pairs of sunglasses, according to the statement from Coyne.

What’s New in Peanuts on TTPM

Snoopy Museum Tokyo opened last Saturday (see story above). As fans around the world, enjoy the work of Charles M. Schulz, TTPM is showcasing the newest toys from Peanuts. For the latest in Toys, Tots, Pets, and More as well as what’s trending, visit TTPM.com.