“During this challenging quarter for retail, we remained focused on improved execution and our results reflect those efforts,” said Dave Brandon, chairman and CEO, Toys “R” Us, Inc. “We grew our international and domestic same-store sales, while maintaining the financial discipline we have worked to achieve. We have more work to do but this is a positive start as we look to further transform the customer experience whenever, wherever, and however they choose to shop with us.”

TRU updated the timeline for its new Domestic e-commerce platform to a scheduled launch in 2017. In addition, TRU has recruited and hired a newly created global chief technology officer and a new chief information officer to ensure a successful transition.

As previously announced, the company entered into an agreement to refinance a portion of its outstanding debt that was due to mature in 2017 and 2018. “This represents a significant step forward in our efforts to create a stronger financial foundation,” said Brandon.

“This is a major achievement, and the toy industry is one step away from operating under a law with a strong national chemical regulations standard,” said Ed Desmond, TIA executive director of external affairs. “Once the president signs the bill and sends it to the Environmental Protection Agency (EPA) for implementation, we are hopeful our members will begin seeing less effort by states and localities to ban chemical use.”

TSCA reform will strengthen the federal chemical regulatory system and has been a top policy priority for the toy industry. TIA has advocated for several years for a stronger federal chemical regulatory system so that states and counties will not feel obligated to act in the absence of stricter federal oversight. Once President Obama signs the bill into law, the EPA will begin the process of prioritizing chemicals and taking necessary steps to review them.

TIA will stay engaged with the EPA during this process to find opportunities to participate in the development of future rules and regulations that could impact the toy industry.

American Greetings Entertainment (AGE) and master toy partner, Just Play, have entered into a co-production and joint venture partnership to relaunch a new series of the 1980s brand Madballs.

All-new Madballs animated shorts are currently in production and set to launch fall 2016 to support a consumer products program already underway with new and digital licensee commitments. Starting in spring 2017, Just Play will launch a variety of products, including classic and mini collectible Madballs, and expand with playsets and accessories at retailers worldwide.

“We know that brand equity just isn’t enough these days, so we’re proud to partner with Just Play and their strong track record of building great classic and modern brands,” said Sean Gorman, president of AGE. “We’re excited to re-introduce Madballs to fans, with a launch supported by ultra-fun, super-cool compelling content for a new generation.”

Rolling out into the digital marketplace, AGE further advances its relationship with Miniclip who will be adding Madballs to its game Agar.io later this month. Las Maquinitas Studios, a subsidiary of Machine Industries, is developing a free-to-play Madballs game for core gamers on iOS and Android mobile and tablet devices worldwide. Neon Mob offers fans digital trading cards and Bare Tree Media offers chat stickers in their Emojitap app, both available now. Babo Invasion, the arena-combat game starring the classic Madballs is also available on Steam and XBLA, produced and developed by Playbrains. 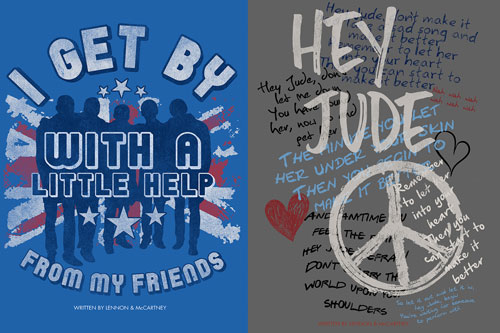 The Northern Songs Lennon-McCartney song catalog, owned by Sony/ATV Music Publishing, has named Epic Rights one of the catalog’s global licensing agents. With its Lyrics Written by Lennon & McCartney program, Epic Rights is developing a global licensing program that will incorporate the iconic lyrics of many of the duo’s most popular songs into licensed products across multiple consumer goods categories.

From the time of their U.S. television debut in 1964 until their split in 1970, The Beatles topped the Billboard Hot 100 chart a record-setting 20 times. Those chart toppers, mostly written by John Lennon and Paul McCartney, are among more than 180 songs that comprise the Lennon-McCartney music catalog. Among the most popular, according to Rolling Stone, are “Come Together”, “Hey Jude”, “Let it Be”, “In My Life”, “Strawberry Fields Forever”, “A Day in the Life”, and “Yesterday”.

TTPM is showcasing the newest Music Toys. For the latest in Toys, Tots, Pets, and More as well as what’s trending, visit TTPM.com.