Kids II announced the relaunch of its signature brands, Baby Einstein and Bright Starts. Leading the rebranding initiative is critically acclaimed designer Joe Duffy. He has partnered with Kids II as creative director. Kids II says he is one of the world’s most respected and sought after thought leaders on branding and design. This is the first of many projects to be led under his creative vision at Kids II.

The Kids II creative design team worked alongside Joe Duffy and team to produce the updated identities for Baby Einstein and Bright Starts, and engaged with the design firm to develop a visual brand language for each brand.

The brand revitalization of Baby Einstein coincides with the 20th anniversary of the brand. The new visual identity is inspired by discovery and progressive learning. Bright Starts, a line of products designed to spark smiles and laughter in babies, is rebranded with simple, bright, and amusing elements.

The new, design-driven look of Baby Einstein and Bright Starts, can be viewed at kidsii.com. The rebranded products are available for purchase now. Additional brand identities will launch over the next year.

Created specifically to serve a growing group of savvy collectors and Cartoon Network fans, The Collective’s launch offering includes designs from 10 different artists and will be featured in an array of highly curated products including limited-edition posters, apparel, phone cases, high-end notebooks, and more. Each month, the collection will be refreshed and new artists will present their interpretations of Cartoon Network Original Series.

In addition to the product offering, The Collective will also feature interviews with each of the artists as well as behind-the-scenes content from some of Cartoon Network’s hit shows. The first collection features 11 different pieces of art, which launched this month.

RobertsBlumberg and John Giacobbe & Associates have created a strategic alliance and merged their sales teams into one New England sales force. Alan Blumberg, Christine Blumberg, and John Giacobbe will continue on as the three principals of the group representing the best toy and gift lines in the industry. Nine sales reps are now servicing a wide variety of distribution channels in the six New England states. Roberts Blumberg Giacobbe can be reached at the following phone numbers. Alan and Christine Blumberg at (203) 453–9515 and John Giacobbe at (508) 935–7931. 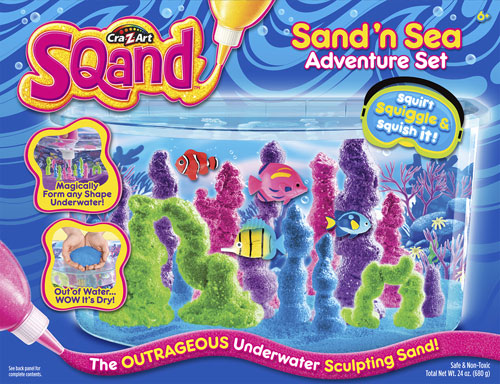 Cra-Z-Art launched Sqand in the U.S. and global markets. Sqand allows kids to create, sculpt, and display underwater scenes in a toy aquarium with specially formulated sand. Out of water, the sand is completely dry. It is currently available at Target and Toys “R” Us.

What’s New in Toys from The Disney Store on TTPM

TTPM is showcasing the latest toys from The Disney Store. For the latest in Toys, Tots, Pets, and More as well as what’s trending, visit TTPM.com.