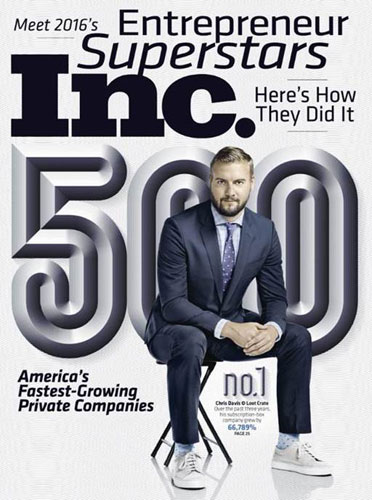 Inc. magazine ranked Loot Crate No. 1 on its 35th annual Inc. 5000, a ranking of the nation’s fastest-growing private companies. The list represents the most comprehensive look at the most important segment of the U.S. economy—independent entrepreneurs. The average company on the list achieved three-year growth of 490 percent. The Inc. 5000’s aggregate revenue is $200 billion, generating 640,000 jobs over the past three years.

“The Inc. 5000 list is different where it really counts,” says Inc. president and editor-in-chief Eric Schurenberg. “It honors real achievement by a founder or a team of them. No one makes the Inc. 5000 without building something great—usually from scratch. That’s one of the hardest things to do in business, as every company founder knows. But without it, free enterprise fails.”

The full 2016 Inc. 5000 list can be viewed here. The issue is also now available on newsstands featuring the top-500 companies.

“While we recognize there are opportunities in the business, and are addressing the challenges we are facing in a difficult retail environment, we are pleased that our team delivered second quarter profitability above our expectations,” said Brian Cornell, chairman and CEO of Target. “Looking ahead, we remain focused on our enterprise priorities as we continue to see the benefits of investing in Signature Categories, store experience, new flex-format stores, and digital capabilities. Although we are planning for a challenging environment in the back half of the year, we believe we have the right strategy to restore traffic and sales growth over time.”

While Target has plans in place to strengthen results over time, based on the current retail environment the company believes it is prudent to lower its expectations for comparable sales in the second half of the year. In both the third and fourth quarters of 2016, Target now expects comparable sales growth in the range of (2.0) percent to flat.

In third quarter 2016, Target expects both GAAP EPS from continuing operations and adjusted EPS of $0.75 to $0.95.

Third quarter and full-year 2016 GAAP EPS from continuing operations may include the impact of certain discrete items, which will be excluded in calculating Adjusted EPS. The company is not currently aware of any such discrete items beyond those already reported in the first and second quarters of 2016.

Second quarter 2016 sales decreased 7.2 percent to $16.2 billion from $17.4 billion last year, reflecting a 1.1 percent decrease in comparable sales combined with the removal of pharmacy and clinic revenues from this year’s results. Comparable digital channel sales grew 16 percent and contributed 0.5 percentage points to comparable sales growth. Segment earnings before interest expense and income taxes (EBIT), which is Target’s measure of segment profit, were $1,241 million in second quarter 2016, a decrease of 8.1 percent from $1,350 million in 2015.

In second quarter 2016, Target returned $1,680 million to shareholders, which consisted of:

TTPM is showcasing newest Preschool Toys. For the latest in Toys, Tots, Pets, and More as well as what’s trending, visit TTPM.com.