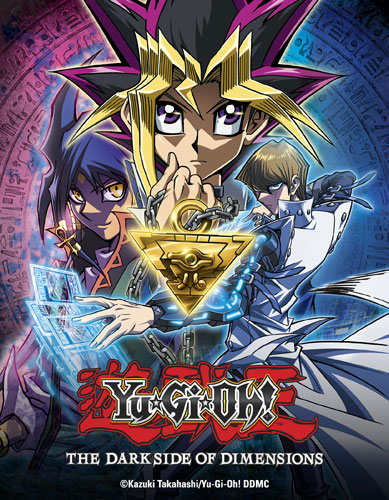 Screenvision Media, a national movie advertising leader, has formed an alliance with 4K Media to distribute Yu-Gi-Oh! The Dark Side of Dimensions to more than 500 theaters across the United States and Canada. The feature film will be released on January 20, 2017, and will run as a limited-time theatrical engagement.

“Fans of the iconic Yu-Gi-Oh! series have been anxiously awaiting the release of Yu-Gi-Oh! The Dark Side of Dimensions in the U.S. and Canada, and we are delighted to have the exclusive opportunity to share it with them through this special theatrical engagement,” said Darryl Schaffer, executive vice-president, operations and exhibitor relations, Screenvision Media. “Our robust exhibitor network and storytelling capabilities before, during, and after the movie promises to maximize the impact of this exciting launch for both 4K Media and moviegoers alike.”

Specific ticketing information will be announced this winter. More information about the film can be found at www.yugiohmovie.com.

The Chicago Toy & Game Group announced its lineup of ChiTAG events for this year’s show. ChiTAG takes place at the Navy Pier in Chicago, November 17–20.

Here is this year’s event lineup:

The Private Label Manufacturers Association (PLMA) announced that Chris Wallace, the Fox television network’s popular host and anchor of Fox News Sunday, will headline the slate of speakers for PLMA’s 2016 Private Label Trade Show, which takes place November 13–15 in Chicago. Following so closely on the heels of the presidential election, PLMA invited Wallace to share his view of what a new administration taking up residence in the White House could mean for the country moving forward.

The keynote breakfast, which takes place prior to the PLMA show floor opening on Monday, November 14, is part of a full program of speakers, seminars, and workshops that will focus attention on the most significant market trends affecting the private label industry, the latest consumer research, and new store brands opportunities. Wallace is scheduled to speak at 8am in the Grand Ballroom on Monday, November 14. For more information on this year’s show and a full list of speakers and seminars, click here.

Variety is reporting that, “ABC has ordered toy-making reality competition series The Toy Box, hosted by Modern Family star Eric Stonestreet. The Toy Box, a partnership between ABC and Mattel Creations that is set to air sometime in the 2016-17 season, will feature contestants from around the world.” To read the full Variety story, click here.

TTPM is showcasing newest Bed & Bath Toys and Gear for Baby. For the latest in Toys, Tots, Pets, and More as well as what’s trending, visit TTPM.com.