Goliath has secured the North American rights for Wahu, a top-performing Australian outdoor brand that features beach toys for kids and families.

The line will debut this spring and is being introduced at New York Toy Fair.

The Wahu brand embraces the outdoor lifestyle with products ranging from inflatables, swim vests, and glow-in-the-dark outdoor toys to a wide variety of sporting goods.

Mattel announced a commitment to introduce 10 million kids to coding by 2020 through an expanded partnership with Tynker, the computing platform used by one in three U.S. schools.

Mattel and Tynker began their partnership in 2015 by developing Hot Wheels and Monster High programming experiences that reached nearly 4 million kids. This year, the long-time partners are slated to launch seven Barbie coding lessons that will teach girls about computer science and programming and expose them to careers such as pet vet, astronaut, and robotics engineer. This is just the next step in a multi-year partnership to introduce kids to the power of computing.

Mattel and Tynker have a number of key initiatives slated for 2018:

The Dedicated Barbie Careers Programming Experience is designed for beginners (grades K and up), and will gradually introduce young learners to basic programming concepts by casting them in different career roles alongside Barbie. The experience will include seven modules and will launch alongside the reveal of Barbie’s Career of the Year this summer.

Mattel Code-A-Thon and Teacher Outreach: Mattel and Tynker will host a digital event during back to school to encourage kids to participate in programming, featuring their favorite characters. The two companies will also work together to provide teachers with the tools needed to leverage this content in the classroom.

Global Student Engagement: Mattel and Tynker will continue to leverage content from Barbie, Hot Wheels, and Monster High to promote the 2018 Computer Science Education Week Hour of Code in December. 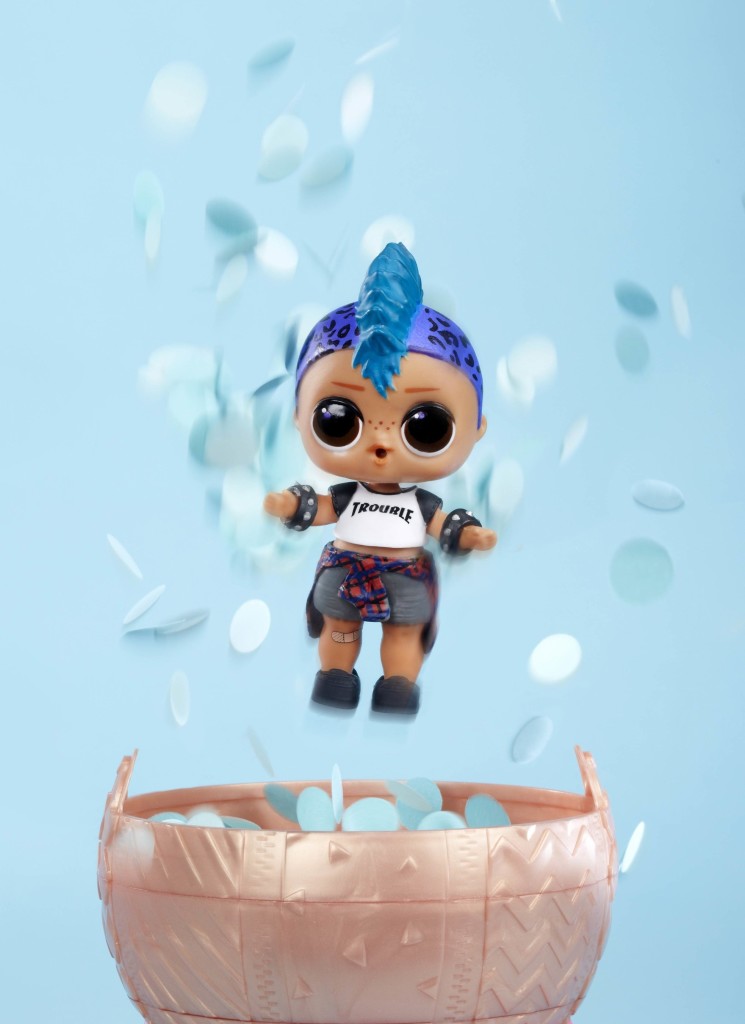 MGA Entertainment is adding brothers to the L.O.L. Surprise! family with the introduction of Punk Boi and Lil Punk Boi. The L.O.L. Surprise! family expands the Rock Club clan with the anatomically correct Punk Boi and his brother Lil Punk Boi, but finding them will be hard—these color-changing dolls are ultra-rare. Punk Boi will be features in the upcoming release of additional Confetti Pop characters and Lil Punk Boi will be part of the Lil Sisters Series 3 collection.

The company also debuts Pearl Surprise, which comes in a glitter purse carrying case with six pearl surprise balls and a large seashell fizz that when dropped in water reveals a limited-edition doll and Lil Sister inside a seashell doll stand.

As part of its 2018 Colors of Caring campaign, the Care Bears and master toy partner, Just Play, announced the winning bear of the Create My Care Bear Contest: Piece of Heart Bear. This all-new pink bear was inspired by a belly badge design from grand-prize contest winner, nine-year-old Emma Vodenik.

Piece of Heart Bear’s quilted belly badge is made up of special fabric pieces gathered from those this endearing new bear loves the most.

The Create My Care Bear contest kicked off during the Care Bears 35th anniversary celebration in 2017 as a way to inspire kids to use their imaginations to create a new Care Bear character that would become part of the Care Bears collection. The entry form, a plain Care Bears template, was available for free online and included with the purchase of select Care Bears plush sold at Walmart, Target, Toys “R” Us, Amazon, and other select retailers.

The contest’s grand-prize winner will receive one of the first plush versions of Piece of Heart Bear as well as a cash award of $3,500. Second (Serena Keville) and third (Kaylee Clancy) place winners will win a prize of $2,000 and $1,000, respectively. More than 1600 entries were submitted for the contest.

The first of the rebooted characters is Patches, the zombie kitty. She’s embroidered with the phrase, “I LOVE U 4 ur BRAINS” on her belly. The second is the Lovecraftian, Cathulhu, a tentacle-faced cat that is unexpectedly cute. It’s based on the cult favorite Cthulhu from H.P. Lovecraft. The third in the new series is Skellie. This one is a fuzzy cat made of bones, smiling at you with all its teeth and oversized eye sockets.

The artists had previously licensed Squaredy Cats to Gund and Kids Preferred, but the creators and licensors are rebooting the brand by changing the image, and producing the toys themselves.

The characters have enjoyed an impressive online presence and social media following since they first went on the market in 2011. The artists have shared their images with followers of the brand, and saw a trend, in that kids and adults preferred their edgier designs to the market driven characters licensees produced, treating it more as a collectible than a toy.

The rebooted cats will be available to fund via a Kickstarter campaign you can find through squaredycats.com. The campaign will run from February 13-March 22.