Dino Dan is a CGI and live-action adventure series that centers on Dan Henderson, a 10-year-old boy whose every waking moment is taken up with dinosaurs. The series, targeting kids ages 4–7, is produced by Sinking Ship Entertainment and distributed by Breakthrough Entertainment.

“We are thrilled to be part of the Fifty Shades phenomenon,” says H.E.R. Accessories CEO Hymie Anteby. “E L James was excited by the prototype samples we sent her so we are confident her fans will love these items as well.”

Cake Boss returns to TLC this month with all-new episodes.

Cut the Rope Apparel Deals for the UK

ZeptoLab in conjunction with ITV Studios Global Entertainment, licensing agent across all countries in the European Union for Cut the Rope, has announced four new licensees for the UK market.

Smith & Brooks, an apparel company, is launching a range of Cut the Rope outerwear beginning this year with a line of T-shirts. The T-shirts will appear at Next, Tesco, and Asda in time for this Christmas.

The character Om Nom will also appear on an upcoming range of backpacks, umbrellas, and wallets for boys and girls from Trade Mark Collections. Launching at retail in Q1 2013 the range will be available first at independent retailers and online, eventually expanding to the mass market.

TDP is bringing Om Nom to girls’ and boys’ pajamas and underwear for the fall/winter season. The apparel, which has been sold to Tesco for launch later this year, will expand to be sold at a range of retail outlets next year.

Bacup Shoes is offering all types of footwear for the children’s market. In addition, it is creating a range of Cut the Rope slippers and EVA (foam rubber soled) footwear for men and women. The footwear is expected to be in store by July 2013. 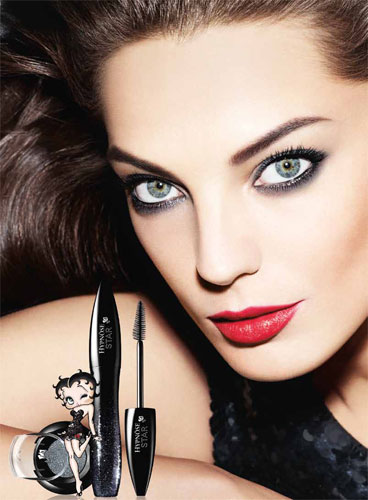 Lancôme is using Betty Boop to promote its latest brand extension in the mascara category, Hypnose Star. After an exclusive launch at Sephora, the Hypnose Star Line will be available December 1 at all department stores and specialty retailers nationwide that carry the Lancôme brand.

The launch will be supported by a comprehensive advertising campaign, featuring Betty Boop touting the beauty benefits of Lancôme’s new Hypnose Star mascara.