Under the agreement, EA will develop and publish new Star Wars titles for a core gaming audience, spanning all interactive platforms and the most popular game genres, while Disney will retain certain rights to develop new titles within the mobile, social, tablet, and online game categories.

WWE announced an exclusive, multi-year agreement with The Bridge Direct to develop and market construction toys based on WWE events and characters. The agreement marks the first time WWE will enter the construction toy category.

Targeted to WWE fans between the ages of 4 and 14, the comprehensive line includes figures, accessories, and construction bricks to “build your own” playsets, which bring WWE’s action-packed events and superstars to life. The WWE construction toys are expected to begin rolling out at major mass retailers in spring 2014.

Family Guy, currently in its 11th season, has more than 52 million followers on Facebook. The K’NEX Family Guy building sets are expected to be available at major retailers in spring 2014.

3-D Systems will allow fans to create personalized Star Trek figurines through the use of its 3DMe technology. BioWorld will offer T-shirts and accessories. Buckle Down will create Star Trek-themed seatbelt buckles for release in May. Card.com is slated to release Star Trek debit cards. CDM will be creating 3-D Glasses for the upcoming film Star Trek Into Darkness. Checks In The Mail will create Star Trek checks set to release this month. Crowded Coop will be designing branded pet accessories for late 2013. Flashman Studios will be creating digital avatars. Funko will release Pop! Vinyl figurines and Pop! plush this fall. iCup will manufacture branded housewares for June release. Palm Beach Beaute will create four fragrances inspired by Star Trek. Power Up/BDA will offer branded cell phone cases. Ruckus GH, Inc., will create a Gorn collectible statue for May release. 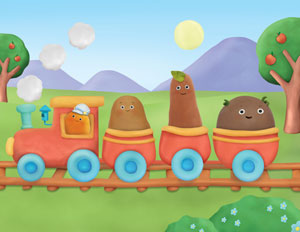 Pac-Man Gets Agent for Italy, Greece

41 Entertainment (41e) announced that it has appointed Team Entertainment (TE) as its new licensing and merchandising agent for Italy and Greece for the Pac-Man and the Ghostly Adventures TV series, which is slated to begin broadcast in fall 2013 in the English-speaking markets and worldwide in spring 2014.