Lima Sky, the gaming studio behind Doodle Jump, announced that it has partnered with Hog Wild to develop a new line of original, Doodle Jump-themed toys. The new toys are expected on shelf in 2014.

Hasbro announced that it has signed a licensing agreement with Benetton Group to create My Little Pony and Transformers fashion collections. The ranges will include apparel, footwear, and accessories for kids and newborns at United Colours of Benetton store locations in 42 countries beginning in spring 2014. 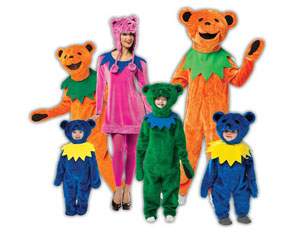 Grateful Dead is also collaborating with Dogfish Head Craft Brewery for American Beauty, a bold pale ale made with 100 percent U.S.-grown ingredients. More than 1,500 fans suggested ideas and Dead-inspired stories for one off-centered ingredient to add to the recipe. Granola, suggested by chemist and homebrewer Thomas Butler, was named the winner. Grizzlies in Eugene, Ore. supplied the granola used in the brew. American Beauty will be available on draft and in 750-ml. bottles throughout Dogfish Head’s 27-state distribution network.

The Wild Kratts are real life brothers Chris and Martin Kratt, who are lifelong students of animals.

Space Enterprises’ The Hive has signed Penguin Young Readers Group as its U.S. children’s publishing partner. Penguin will build a publishing program offering 8×8 storybooks, sticker book formats, and eBooks with enhanced read-to-me functions. The program is expected to roll out in spring 2015. The deal was brokered by The Hive’s North America licensing agent, The Joester Loria Group. The Hive began airing on Disney Jr. in October 2012.

Man Cave has recently appointed Established Brands as its exclusive licensing agent. With their roots in home parties for men, Man Cave is extending its brand and plans to expand at retail into multiple categories. The brand is actively seeking licensees in categories such as grilling, furniture, home décor, food/beverage, games/novelty, and many more.

Man Cave originated as a home party for men and has accumulated more than 1,700 sales reps in 48 states. Established Brands will build a licensing program for Man Cave to offer a wide range of lifestyle products for men beginning Father’s Day 2014.