Corus Entertainment’s Nelvana announced that it has signed a publishing deal with Scholastic granting it worldwide English-language rights to produce a range of preschool books in a number of formats based on the new series, Little Charmers.

Scholastic plans to launch the series in the U.S. and Canada in spring 2016 with two storybooks. Additional formats including 8x8s, readers, paper-over-board, activity books, and e-books will follow throughout 2016 at retail as well as through Scholastic Book Clubs and Book Fairs. Scholastic UK and Scholastic Australia/New Zealand will roll out the series in fall 2016 in their territories.

Little Charmers, produced by Nelvana and Spin Master, currently airs on Nickelodeon and Nick Jr. in the U.S. and Treehouse in Canada.

41 Entertainment (41E) and Arad Animation announced that they have granted the exclusive worldwide master toy license to MGA Entertainment for its Kong—King of the Apes property, which will air on Netflix. The product line, set for 2016, will include figures, electronic and action plush, playsets, vehicles, games (electronic and non-electronic), and learning aid toys. The property is designed for kids ages 5–10. More details about the property will be unveiled at Licensing Show in June, according to 41E.

Fuhu, Inc., the creator of the nabi tablet, announced that it has finalized deals with Disney and Discovery Communications to bring a wide range of content from their libraries to the company’s nabi Pass mixed media subscription service. Introduced in December 2014, nabi Pass enables kids, ages 3–14, to have access to content across several categories and different media formats (video, apps, games, books). nabi Pass is available exclusively on Fuhu’s family of nabi tablets.

Through the deal with Disney, Fuhu will gain access each month to a new collection of videos that feature programming from Disney Channel, Disney Junior, and Disney XD, as well as select Disney apps and ebooks. Discovery Communications will provide content from across its portfolio under the Discovery Family Channel brand.

JRL Group, Inc., announced it has secured a licensing partnership between Encyclopaedia Britannica, Inc., and Great Big Canvas. Britannica’s private collection of images and illustrations will be available as high-quality wall art and canvas prints. 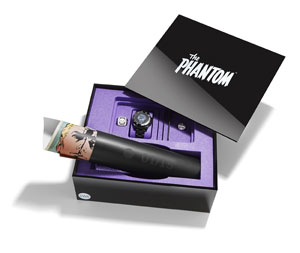 Each design is housed in a crafted presentation box and includes a numbered, custom comic strip poster and steel warranty cards. Phantom also includes handcrafted rings by the British company, The Great Frog. The reverse side of each watch features an engraving with both the DRx logo as well as a unique limited-edition number. The two new designs form part of a strictly limited-edition run and are exclusively available directly from the Bamford Watch Department.