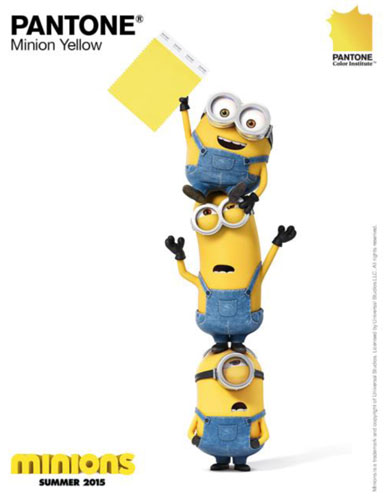 Pantone, Illumination Entertainment, and Universal Partnerships & Licensing announced the creation of an official new Pantone Color called Minion Yellow. It is based on the Minions from Universal Pictures and Illumination’s Despicable Me global film franchise, including the upcoming prequel Minions, opening in theaters July 10. The companies say that the development of Pantone Minion Yellow marks the first time in Pantone history that a color has been created and named after a character. The custom color will be added to the Pantone Fashion, Home + Interiors color palette with the next color addition.

Morgen Studios has appointed Planeta Junior and Nottingham Forest as licensing, merchandising, and promotional agents for its animated TV series Super 4, which is based on the Playmobil brand. Nottingham Forest has been appointed the agent in Spain and Portugal, while Planeta Junior is the agent in Italy. To read more about the Playmobil-inspired series, pick up the June issue of TFE.

Xcel Brands, Inc., announced that Isaac Mizrahi will team with 1-800-Flowers.com to offer a collection of floral arrangements, plants, and gifts featuring Mizrahi’s signature style. The assortment includes azaleas, irises, orchids, white roses, and mixed bouquets. Small gifts include a set of candles, floral scarf, leather wristlets, and stationery. The collection will be available at 1-800-Flowers.com. Mizrahi has also partnered with FineStationery.com, a subsidiary of 1-800-Flowers.com, to create an exclusive line of seasonal stationery and greeting cards.

Minions Paradise to Debut this Summer

Electronic Arts, Illumination Entertainment, and Universal Partnerships & Licensing announced a new multi-title partnership to bring the Minions and other characters from upcoming Illumination films to life in all-new mobile games. Minions Paradise, the first game from the collaboration, which is free to download, launches worldwide this summer. It allows players to create their own tropical Minion utopia and take control of a never-before-seen Minion named Phil.

Noddy Returns to TV in France

Noddy is returning to television with a new series, Noddy, Toyland Detective, which is set to debut in 2016 on France Télévisions’ France 5. The new CG-animated series is produced by Gaumont Animation, in association with DreamWorks Animation Television, and in partnership with France Télévisions. It will premiere on commissioning broadcaster France 5’s Zouzous in spring 2016. Gaumont Animation will distribute the series in France and French-speaking Europe. DreamWorks Animation owns Noddy and retains additional global distribution rights and manages licensing and merchandising for the property.

CJ Products, the creators of the Pillow Pets foldable plush, announced that it will be creating an exclusive line of plush products featuring characters from My Little Pony: Friendship Is Magic animated television series under license from Hasbro, Inc.

My Little Pony characters Twilight Sparkle and Rainbow Dash will be featured as foldable Pillow Pets, Dream Lites, plush backpacks, Sling Paks, and FabTablets universal tablet holders. The line is expected to be at retail in June.

One Entertainment, an agency specializing in soccer brand extension, has been appointed by WeMatch to develop the licensing program in the United States and Canada for the 2016 Copa America tournament.

Copa America, the most prestigious soccer tournament in the Americas, will celebrate its 100th birthday in the form of the first truly Pan-American cup from June 3–June 26, 2016, in the United States. It will include 16 national teams from North, South, and Central America, and the Caribbean competing for the title in 32 games. There will be 24 major metropolitan areas bidding to host this historic event and the final host cities will be decided over the coming months.

Under the terms of the agreement, One Entertainment will execute a comprehensive program to leverage the tournament in all key product categories, including apparel, accessories, toys, and gifts.

Global Eagle Entertainment, Inc., a media and connectivity provider to the travel industry, announced a partnership with Rovio Entertainment to provide Angry Birds to airlines as inflight entertainment content.