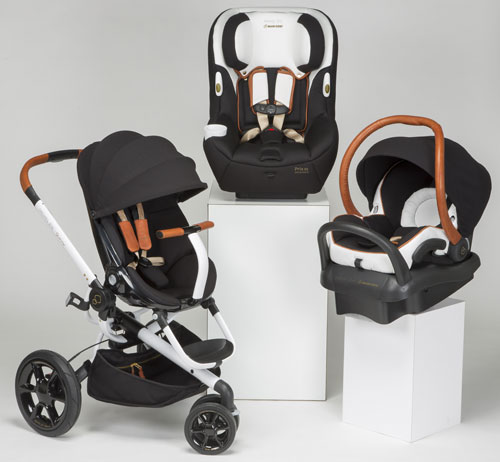 The Rachel Zoe x Quinny and Maxi-Cosi Collection was unveiled this week at ABC Kids Expo in Las Vegas. It will be available first at Nordstrom in spring 2016, followed by specialty baby stores nationwide. The collection is expected to range from approximately $200–$850.

The Bel Group announced a worldwide licensing representation agreement with IMG for its brand, The Laughing Cow. The Laughing Cow is sold in 137 countries. With more than 263 million consumers worldwide, the brand benefits from a unique global appeal.

A style guide has already been developed around four key values of the brand—design & contemporary; fun & bold; retro & vintage; and happy family—which will inspire designs across a range of categories, including fashion apparel, decoration items, games, kitchen accessories, and publishing.

The Bel Group licensing activity will be led by an IMG team based in Paris, which will also work with IMG’s global licensing team.

Celebrity interior designer and TV personality, Genevieve Gorder is introducing a line of holiday cards with Pear Tree Greetings, an online stationery retailer. The two parties were brought together by Beanstalk, Gorder’s exclusive brand extension agency. She has more than 20 years of design experience, many of them spent on popular design shows with HGTV and TLC.

There are a total of 15 designs. The collection is available now, exclusively at www.peartreegreetings.com.

Celessence Technologies microencapsulation technology uses touch, friction, or motion to release and deliver scent. Microcapsules are bound to a surface with a proprietary binder that ensures controlled release that is long lasting, affordable, and even wash durable.

Kittrich Corporation has also been signed to apply Celessence’s scent-delivery system to a range of scent-infused stationery, housewares, closet, and laundry products. The products are anticipated to debut at retail back-to-school 2016 for stationery items and in Q2 2016 for housewares.

Forever 21 announces the launch of this season’s NHL Collection at Forever 21, which is an exclusive line of women’s apparel licensed through the National Hockey League. For the second straight year, the line is launching exclusively in Canada and will feature tops, tees, hoodies, and sweatpants with iconic imagery from around the NHL. It is available starting tomorrow (October 22).

4K Media Inc., the Konami Digital Entertainment, Inc., subsidiary that manages the licensing and marketing of the Yu-Gi-Oh! brand, announced an agreement with CWS Media Group, LLC for the creation of Yu-Gi-Oh!-branded wall art in the form of wall scrolls and acrylic posters that will be available online and at retail this summer in the U.S., Canada, Australia, and New Zealand.

Rainbow’s Winx Club will debut in Thailand on JKN Channel this month. It is the first time the show has been seen on Thai screens. Winx Club is already popular elsewhere in the surrounding region, through broadcast in countries such as Malaysia, Vietnam, China, and Singapore.

Paws, Inc., announced that it has appointed Jam Brands as the exclusive licensing agency for Garfield in Canada. Paws, Inc., says that Garfield has more than 95 percent brand familiarity, two movies, a new TV show, more than 135 million Garfield books sold, and presence in 111 countries.