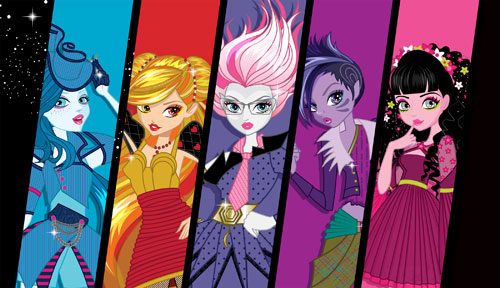 Following the June 20 launch of SpacePOP with YouTube, Genius Brands International (GBI) continues to expand the licensing, merchandising, and retail program for its new tween girls’ brand, SpacePOP, with the appointment of a slate of new North American licensees.

The second season of Yo-Kai Watch from Level-5 abby, Inc., will premiere on Disney XD beginning Monday, August 1 with 10 consecutive new episodes airing weekdays through Friday, August 12 at 12:30 p.m. ET/PT. On August 27, Yo-Kai Watch will move to its regular time slot on Saturday mornings at 8:30 a.m. ET/PT. The second season will include 50 episodes—doubling the 26 episodes of the show’s premiere season—and introduces more than 90 new Yo-Kai.

Rasta Imposta introduces The Wife Costume for this Halloween. The costume is similar to the dress Melania Trump wore during her speech at the Republican National Convention earlier this month. The Wife Costume will be available for immediate purchase on Amazon.com, with costumes available to ship in mid-August.

Melania Trump delivered her speech during the convention in a stunning cotton/silk off-white dress from a highly publicized London-based fashion designer. The reportedly $2,200 dress sold out online after the speech. Rasta Imposta says its version will retail for less than $45.

Cryptozoic Entertainment will unveil custom card and board games, including Mr. Meeseeks Box of Fun, a dice & dares game, which will be available August 3 and at GenCon.

Adult Halloween costumes and accessories from PhatMojo will arrive in specialty stores in September. Fans of the show will be able to dress up as their favorite characters thanks to the debut of Rick and Morty masks, Rick’s lab coat, and a foam laser gun.

All-American Licensing announced the signing of Swiss Diamond, non-stick cookware. The high-end Swiss cookware brand was founded in 2001. Swiss Diamond has positioned its brand for foodies, home chefs, and non-compromising clientele. Now, AAL will provide a strategic road map for moving into the mass market. Swiss Diamond will expand beyond cookware to provide consumers with products for the entire house through licensees. All American Licensing will look to license products in key categories such as glassware, glass bake ware, kitchen gadgets, barware, wine accessories, kitchen textile, small electronic appliances, dinnerware, silverware, home decorations, furniture, and more. Product is expected at retail by summer 2017.

Rubie’s Costume Company, under license with Columbia Pictures, announced the launch of officially licensed costumes, T-shirts, wigs, accessories, and masks based on the latest installment in the Ghostbusters franchise. The Ghostbusters Collection is available in child unisex sizes and adult standard, deluxe, and ultra-deluxe styles. Inspired by the movie’s main characters, Abby, Erin, Jillian, Patty, and Kevin, the costumes are specially designed to reflect the one-piece jumpsuits worn in the movie. The adult female costumes include four individual nametags so customers can easily transform into their favorite Ghostbusters character. In addition, the collection also offers the new ghostly characters Rowen and Sparky. This line will be in stores this Halloween along with the Classic Ghostbusters Collection.

In addition to establishing these new licenses, Brand Central continues to drive growth for the brand and is actively pursuing partnerships in fresh and frozen meals, spirits, condiments, merchandise, and more.

Fermata Partners has signed a deal with Arsenal Football Club, adding the London-based club to the firm’s growing roster of global brands. Fermata Partners will work to expand the club’s retail business in North America through the establishment of partnerships with licensees and retailers.

Fermata Partners has already executed several key agreements for Arsenal F.C., with the first deliveries of product expected in the marketplace in third and fourth quarter of 2016.