Entertainment One (eOne) unveiled plans for the retail launch of Peppa Pig in India.

The TV series made its debut in India in June 2016 on Viacom18’s VOD service, VOOT Kids, and followed with its premiere on Nick Jr. India earlier this month.

eOne has signed the merchandising and licensing division of Viacom18, Viacom18 Consumer Products, to handle licensing for the brand across India and the Indian subcontinent.

Viacom18 recently rolled out the first line of Peppa Pig merchandise to the Indian market, which includes plush toys, activity sets, and more. The products are now available in retailers across India, including Amazon online and all 22 Hamleys toy stores. Hamleys will also support the launch with a retail marketing campaign.

The deal was negotiated by Shout’s Jeremy Whitham and Caruso.

Kids Preferred On Board for Goodnight, Goodnight Construction Site

Kids Preferred has acquired the toy license for Goodnight, Goodnight Construction Site from Chronicle Books. Under the terms of the deal, Kids Preferred will design, produce, and bring to market a variety of early childhood developmental toys and gifts inspired by the No. 1 New York Times bestseller.

Products will include plush, preschool, and activity toys. The first items will hit shelves as early as spring 2017. The deal was brokered by HAP Consulting. 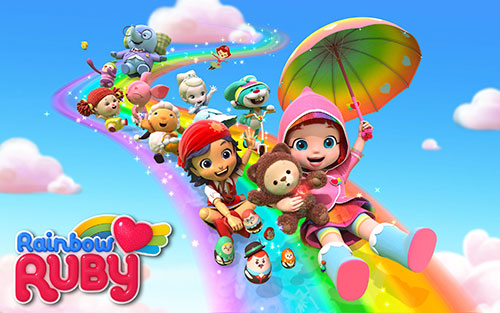 The show is produced by CJ E&M, in association with DHX Media and China Entertainment. CPLG is handling the global licensing program (excluding Asia and Latin America).

DHX Media has signed 10 broadcast deals with networks around the globe, including Family Jr. in Canada, TV3 in Ireland, JimJam in Benelux, YLE in Finland, NRK in Sweden, Discovery’s Frisbee in Italy, Canal Panda and SIC in Portugal, Hop! Media Group in Israel, MiniMini+ in Poland; and Minika in Turkey.

Rainbow Ruby will launch in Q1 with South Korea’s EBS and Tooniverse.

The series currently airs on multiple broadcasters in Asia including ABS-CBN (Philippines), RTV (Indonesia), Thai PBS (Thailand), and Yoyo TV (Taiwan). Additional channels are expected to air the series within the year.

Rainbow Ruby is a 3-D CGI-animated preschool series that follows a six-year-old girl named Ruby as she transports to Rainbow Village, where her toys come alive. Ruby must take on different professions to solve problems creatively.

With Marvel’s Guardians of the Galaxy Vol. 2 to hit theaters in spring, Zak Designs is releasing a new line of themed dinnerware and drinkware.

Zak’s Guardians of the Galaxy Vol. 2 line includes a rimmed plate and large ceramic mug as well as a 25-ounce Union bottle with a locking tab on the lid and wide opening. The line also includes both a 16.5-ounce and 25-ounce Tritan water bottle with a flip-up spout for straws.

All of the items are BPA-free, dishwasher safe, and feature Guardians of the Galaxy-themed designs.

The agreement, which grants Zoofy the rights to manufacture Emojination-branded inflatable play structures for worldwide distribution, marks the first time AI has granted a license for a proprietary brand. The deal broadens Zoofy’s relationship beyond that of a distributor of AI’s line of children’s backpacks. The first products created under the agreement will be introduced at Toy Fair in New York.