Zuru announced an exclusive worldwide agreement with Antsy Labs to manufacture and distribute its Kickstarter-backed Fidget Cube to major retailers in the U.S., Canada, and other countries these coming months.

With a significant IP portfolio built out on Fidget Cube, Zuru plans to aggressively pursue all knock offs and retailers carrying these to ensure the IP rights are protected as part of its launch strategy. Anna Mowbray, Zuru COO, states that, “We are incredibly excited to have gained the rights to this fantastic toy. One critical element for us is to now protect the Antsy Labs invention and concept by ensuring they are not undercut by cheap, terrible quality knock-offs.” She continues, “As a corporate mentality we strive to work with legitimate patent and IP holders providing a platform for true inventions to make their way into market and to be respected. We will be ensuring we look into all avenues to vigorously protect this item both in the USA, Canada and internationally.”

Fidget Cube is specifically designed to help restless hands focus. The six-sided fidget toy is equipped with an array of features including five clicker buttons, two of which are silenced for quiet fidgeting, a switch to flick up and down and a side designed after a gaming joystick with gliding action.
Available in eight colors, the Fidget Cube is set to roll out in the U.S. and Canada in June. Alongside this, Zuru and Antsy Labs will also be launching the Zuru Spinner and Fidget Prism, a companion for the Fidget Cube. With licensing opportunities for the viral sensation in their radar, they expect to announce key partnerships to launch before Christmas.

Nimuno Loops instantly transforms most surfaces into a base for construction toy bricks and figures. One side features a bendable, flexible surface with a toy block pattern that is compatible with LEGO toys and other toy construction brands and can be cut to any desired size. The other side has a reusable adhesive backing to allow builders to construct on nearly any object, around corners, and on curved surfaces to make 3-D creations. The product launched on Indiegogo, raising more than $1.6 million in crowd-funding, in 30 days.

ZURU is expected to start shipping Nimuno Loops, which will be branded and marketed in conjunction with the company’s Mayka Construction brand, from July. 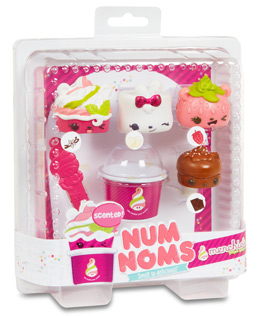 MGA Entertainment (“MGAE”), and Menchie’s, a self-serve frozen yogurt franchise, are partnering for a nationwide promotion available exclusively at Toys “R” Us. Num Noms, the collectible line with more than 400 characters and 50 smell variations, will launch an exclusive Menchie’s starter pack featuring the Menchie’s Sweet Friends, available only at Toys”R”Us stores nationwide and online beginning in July.

To kick-off the partnership, approximately 420 Menchie’s stores throughout the U.S. will get a “Smell so delicious” campaign makeover, featuring two exclusively designed limited-edition frozen yogurt cups.

On the heels of Star Trek’s 50th anniversary year in 2016, a robust lineup of new domestic and international licensees have signed on to expand its merchandising program across key categories. In the U.S., licensees include Open Roads Brands for metal wall décor, Crystalize It for bobbleheads and crystal plaques, and the N.J. Croce Company will launch novelty Star Trek bendable figures and bendable keychains. WobbleWorks will launch the 3Doodler Create Star Trek Pen Set and Raw Thrills will introduce Star Trek coin-operated amusement machines. Middle of Beyond will incorporate Star Trek into a new line of sweater designs, while OT Sports will offer Star Trek-themed jerseys to junior and minor professional sports for specially themed nights. In Japan, Imperial Enterprises will launch a line of Star Trek-inspired watches, while Caravan debuts a line of mobile accessories. Camino & Co. will unveil Star Trek Japanese Folding Fans, and Kanehira Co. will release a line of stamps celebrating the brand. In European territories, Misirli UK Limited brings a line of hosiery to fans, and Viving Costumes debuting a T-shirt collection in Spain and Portugal. In South America, Brazil will see a Star Trek stationery line from São Domingos. Additional new Star Trek product lines will include PC accessories from Taibo Beijing Technology Ltd.; character masks from Trick-or-Treat Studios available in the U.S., Canada, and across Europe; and co-branded board and card games launching in the UK, Germany, Australia, and more from Winning Moves.

For the Showtime series Billions, Stili Group USA will create a Billions-branded vodka, while Zynga will offer free-to-play online slots game in its Hit It Rich! Slots. Le Mans fans worldwide can read a new graphic novel from Garbo Studios. In the U.S. and Canada, fans of NCIS will soon find branded lighters from BIC USA. TVM Fashion Lab will debut a full lineup of apparel and accessories in the UK and Ireland across multiple CBS brands including Beverly Hills 90210, Taxi, Happy Days, Mork & Mindy, The Twilight Zone, Penny Dreadful, and Dynasty.

Entertainment One (eOne)’s preschool property, PJ Masks, expands its global footprint with merchandise launches poised across the Asia Pacific and Latin American regions, in addition to new licensees in the UK and Australia.

A raft of new agent appointments for PJ Masks will see merchandise launch across the Asia Pacific region, spearheaded by the Just Play global master toy line, beginning in June. Medialink will represent the property in Mainland China, Hong Kong, Taiwan, and Southeast Asia. Dianos will manage consumer products in Korea, and Bradford Licensing will handle licensing in India.

Just Play’s master toy line will also roll out throughout Latin America in August, via local toy distributors Bandai (Mexico), DTC (Brazil), and Elite (remaining Latin American territories). Core categories including toys, dress-up, publishing, partyware, and back to school have been signed for the brand across the region by the eOne’s local office based in Sao Paulo.

In the UK, where the first line of PJ Masks toys and dress-up launched in February, new partners have signed up to the licensing program with new ranges set to hit retail from summer 2017. These include VMC (accessories), Amscan (dress-up), MV Sports (wheeled toys), Worlds Apart (homewares), Dreamtex (bedding and bedroom accessories), Spearmark (lighting), Sambro (stationery), and Kinnerton (confectionery).