Golden Bear has named Moose Toys the master toy distributor for the Bush Baby World brand in the U.S. and Canada.

The brand will be sold as Fur Babies World in North America, and will hit retail in spring 2018. The range will be identical to the UK products and the animation will be repurposed for the North American market.

From January 1, 2018, Swimways will become the exclusive distributor in the U.S., Canada, Mexico, and Italy for the following products from Tucker Toys: Phlat Ball, Zoingo Boingo Pogo, Disc Jock-e, and Kite-A-Pult. 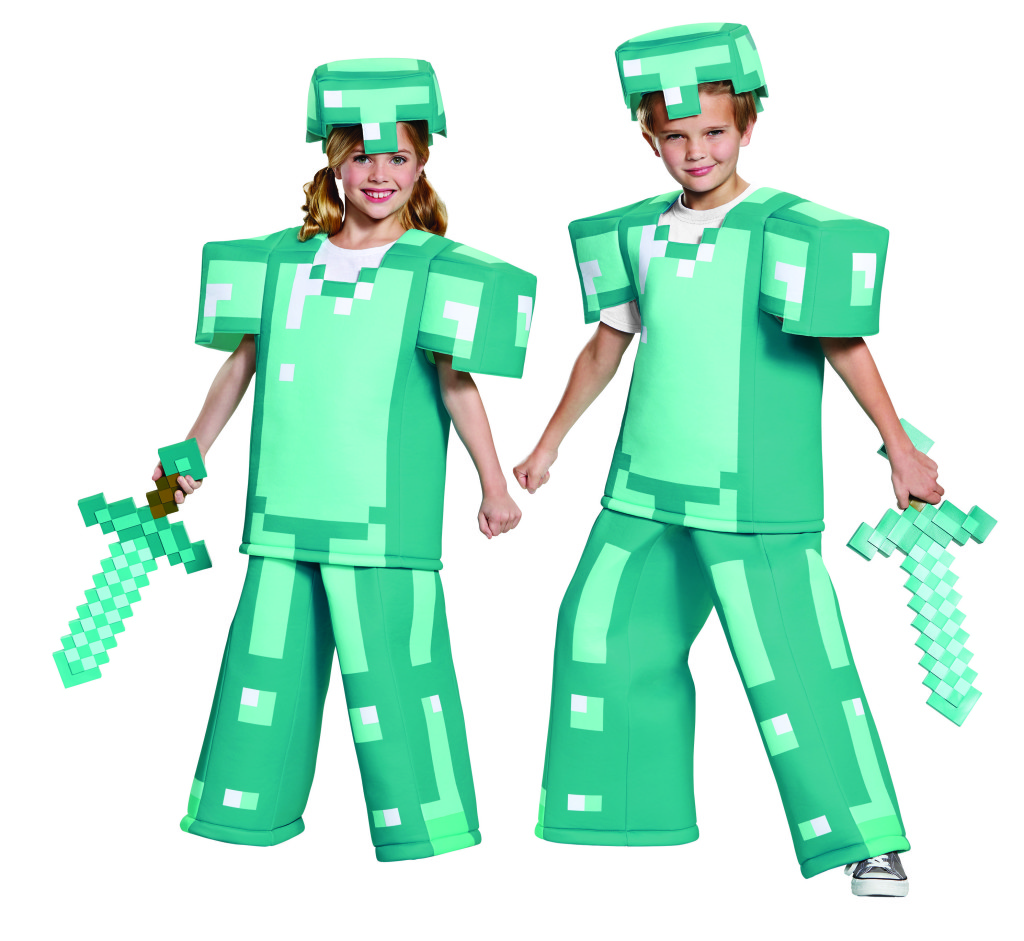 Disguise, the Halloween costume division of JAKKS Pacific, has launched the first-ever Minecraft costumes and accessories

Disguise has created authentic, licensed Halloween costumes and accessories based on fan-favorite characters from Minecraft. Kids can choose from iconic characters such as Steve, Alex, or the Creeper, or don a full set of diamond Minecraft Armor. Pants and tunic are designed to mimic the game’s 3-D blocky aesthetic, with ample range of motion for trick-or-treating. The long-sleeve tunic features detailed character artwork on the front and continued print coverage on the back. The half-masks include mesh eye-plates and foam inserts designed to be more comfortable for wearers and allow for good range of vision. Kids can also add the Minecraft Sword or Minecraft Pickaxe as an accessory to complete their costume.

Maurizio Disteranno Licensing (MD Licensing) adds new properties to its portfolio, including the digital series Booba and Simon’s Cat, which are on display this week at Brand Licensing Europe (booth B58).

Produced by 3D Sparrow animation studio, Booba tells the tale of a friendly creature whose energy, awkward movements, and desire to learn more about the world around him often lead to entertaining results. The his airs on Amazon Prime and its own dedicated online channel has now inspired a licensing campaign.

Simon’s Cat is an animated cartoon and book series about a hungry house cat who is in regular conflict with his owner. First published in the UK in 2009, the book starring the food-blessed, accident-prone feline and owner Simon now appears in multiple countries and inspired more titles. A newspaper comic strip followed, and then an series of animated shorts on YouTube. Now, brand owner Endemic Shine Group is launching the property into licensing.

As part of a strategic alliance with Biplano known as BMD Licensing Partners, MD Licensing will also be promoting opportunities in France, Italy, Spain, and Portugal for Sony Pictures, and in particular The Emoji Movie, Jumanji, Peter Rabbit, and the Barbie Movie.

In a new agreement, Rainbow will now represent Santoro’s Gorjuss collection across Italy, France, and Turkey.

Rainbow plans to capitalize on the growth of the property. In France and Italy, there is already a BTS presence as well as established success in DTR and apparel. Talks are underway across various other categories including toy, food, and household goods.

The collaboration launched at BLE 17 at booths C10 (Rainbow) and C2/D5 (Santoro).

On the heels of its 35th anniversary, Care Bears has gained new agency partnerships that include Bulldog Licensing (UK and EIRE), Sagoo (France, Belgium, Netherlands, and Luxembourg), Mideogen (Israel), and Team! Licensing (Germany). The agencies join IMG Asia, which came aboard last year and bolstered its kids and lifestyle programs in Japan, South Korea, Southeast Asia, and Mainland China. New broadcast deals include Neflix, which has renewed 26 half-hours of Care Bears Welcome to care-a-Lot globally; KiKA Germany, which signed onto 12 half-hours of Care Bears & Cousins starting in 2018 as a companion to Welcome to Care-a-Lot; and Jetsen Huashi Wangju China, which picked up multiple series including Welcome to Care-a-Lot, Adventures in Care-a-Lot, and Care Bears & Cousins.

Egmont Publishing, and Roblox Corporation, the largest user-generated social gaming platform, announced a partnership that will bring Roblox games, characters, worlds, avatars, developers, and the Roblox community as a whole to life in a variety of books for Roblox fans of all ages. The first books will be released in the second half of 2018.

Egmont distributes part of its profits to charitable activities through the Egmont Foundation and in partnering with Egmont, proceeds from the Roblox publishing will be supporting initiatives that generate positive change and value for children and young people at risk.

Based on the new Betty Boop Now merchandising campaign, multiple licensees are rolling into market with new Betty Boop-inspired product.

The reimagined look for the animated fashion icon has been in development for the past 18 months by King Features, Betty Boop proprietor Fletcher Studios, and its leading design partners.

Hearst-owned King Features and Fleischer Studios collaborated with Zac Posen, the Pantone Color Institute, Hearst Magazines, and the School of Visual Arts to evolve Betty’s look and spirit, while remaining true to her innate personality as a strong, independent yet playful female.

The proprietary color—Betty Boop Red developed by Pantone—laid the foundation for the Betty Boop campaigns and will consistently define the brand across all materials and platforms. Viewpoint Colour: The Color Futures Book, the trend forecasting magazine just published for the design community features Betty Boop as one of three brands showcased in Issue 02 (Autumn/Winter 2018/19).

A first glimpse of Betty Boop’s updated style and color was seen in February with the debut of two new dresses from Zac Posen and a new “Betty Boop Red” Lipstick from M·A·C Cosmetics. The launch of Betty Boop’s new look also featured her first animated content, a three-part short that harkened back to the original Fleischer Studios Betty Boop animation and starred Betty alongside Zac Posen.

Licensing Link, which manages the licensing program in the UK and Ireland for the Molang brand on behalf of worldwide licensor Millimages, welcomed a further four licensees for the animated series.

Molang and his best friend Piu Piu first garnered attention on the personal blog of Korean illustrator Hye-Ji Yoon, and was popularized through instant messaging apps. French animation and production studio Millimages came abroad to bring Molang into its own animated series, which is strongly based on visual humor. To date, 156 three-and-a-half-minute episodes have been made.

Under the agreement, De Agostini Editore acquires the exclusive pay TV rights to Xilam shows including Oggy & the Cockroaches, Zig & Sharko, and A New Kind of Magic as well as the latest studio titles Mr Magoo and Moka.