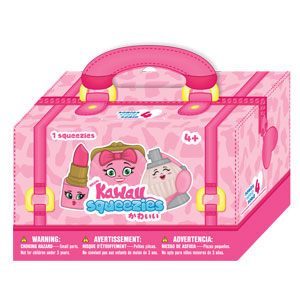 Play Visions Inc. will be the exclusive partner of Emzo Kawaii Squeezies in North America and will take the lead on sales and distribution.

On the licensing front, Planeta Junior will represent the show in France, where it launched on France Télévisions in 2017. Spotlight has already brought on a number of licensees in the U.S., following its global debut on Sprout.

THK is the brainchild of Emmy-nominated writer Mark Bailey and designers Robin Perkins and Clifford Selbert, founders of SPD Brands. The property consists of six characters with tiny heads, big hearts and large huggable bodies: Nickleby the Lion, Twist the Tiger, Dorrit the Elephant, Bagstock the Fox, Heep the Sloth, and Pip the Bear.

To maximize the brand’s potential and increase its international reach, THK has partnered with Evolution to spearhead international distribution partnerships in foreign territories for the core plush line, with the longer term goal of developing a robust licensing and merchandising program worldwide.

The Tiny Headed Kingdom property will be showcased at the Evolution booth at the upcoming International Licensing Expo in Las Vegas NV, May 22nd – 24th at booth # C-142.

In the game, players work together by combining the Parr family’s abilities and powers to conquer crime and family life in a LEGO world. Players explore story levels and a hub world, including Municiberg and Nomanisan Island, as they use their unique super abilities to bring the city’s villains to justice. Gamers can assemble LEGO builds on their own or team up for two-player co-op mode.

LEGO The Incredibles will be available for Nintendo Switch, PlayStation 4, Xbox One, and PC on June 15, the same day Incredibles 2 opens in theaters nationwide.