Striker Entertainment has partnered with Blumhouse Television on a first look television development deal.
With a history of developing impactful consumer products campaigns around brand new as well as seasoned rights, including its award-winning campaigns for AMC’s The Walking Dead, Angry Birds and Five Nights at Freddy’s, Striker Entertainment will join forces with Blumhouse to develop franchises based on existing brands, video games and consumer product franchises, including a potential film based on Five Nights at Freddy’s. Striker will be sourcing IP from less traditional areas, but areas with growing communities of fans that have potential for traditional media exploitation.

“Often time consumer products are an afterthought when films and television series are being developed, but ultimately they can play a huge role in marketing these projects, and in generating ancillary revenue and building community,” said Russell Binder, Striker Entertainment. “We want to employ a more strategic approach from the beginning that anticipates fan engagement, and we know that Blumhouse shares our vision.”

“Striker Entertainment understands the importance of extending storytelling beyond the screen, which is what we hope to do with this partnership. They are incredibly creative and bring fresh thinking to everything they work on,” said Jeremy Gold, co-president Blumhouse Television. Added, Marci Wiseman, co-president Blumhouse Television, “With so much content being pushed out, it is more important than ever to find new ways to break through to engage the audience, making marketing and consumer products more important than ever.” 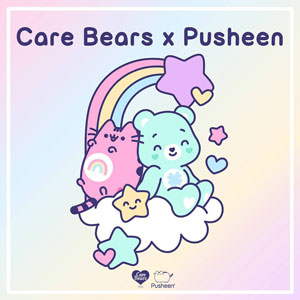 As part of the 2018 Colors of Caring campaign, Care Bears announced an apparel collaboration with Pusheen.
CARE BEARS x PUSHEEN will launch on April 28 at the LA-based store JapanLA, online at www.japanla.com, and Pusheen’s online store www.heychickadee.com. The collection will consist of T-shirts, dresses, and more available in sizes small to 4X.

To commemorate the collaboration, Care Bears and Pusheen will host a launch event at JapanLA on Saturday, April 28 from 11 a.m.–6 p.m. Attendees will also have a chance to win giveaway prizes and get a free gift with purchase. Cheer Bear will be giving out free hugs to attendees from 11 a.m.–2 p.m.

Warner Bros. Consumer Products (WBCP) and generationOn, the youth division of Points of Light, have partnered to create the Scooby-Doo ‘DOO GOOD’ campaign, a pro-social initiative infused with creativity to mobilize kids and their parents to create change in their local communities. By channeling the spirit of Scooby-Doo, the ‘DOO GOOD’ campaign seeks to make the world of social good more relatable to kids. To kick off the campaign, ‘DOO GOOD’ will focus on three key initiatives throughout the year: Save the Environment, Fight Hunger and Animal Welfare.

WBCP and generationOn have also teamed up to launch 35 new Kids Care Clubs across the nation, funding start-up grants to support kids and adult mentors to participate in service opportunities. The $500 grants will be given to clubs that participate in at least two of the key project themes for the year. Grantees will be provided additional resources to implement hands-on service.

Launching alongside the campaign will be the dedicated platform, ScoobyDooGood.com, which will serve as home base to learn about ‘DOO GOOD’. toolkit guides inspired by this year’s themes are available to download such as: Velma’s Reading List, easy ways to ‘DOO GOOD,’ DIY projects with step-by-step instructions, and reflection questions for kids to cement what they learned along the way. Also provided is an official ‘DOO GOOD’ Badge Book and badges for young philanthropists to track their achievements based on the toolkit. The microsite will also provide opportunities to share ‘DOO GOOD’ stories and spotlight participating kids at #DooGood through social media.

‘DOO GOOD’ kicked off the campaign nationwide with the initiative, Save the Environment, on April 15, leading into Earth Day on April 22. In tandem, Warner Bros., generationOn, and local community wellness non-profit organization Enrich LA, will also be executing a Los Angeles-based social service act at a local underserved school.

For more information, please go to ScoobyDooGood.com, as well as links for the Scooby-Doo ‘DOO GOOD’ campaign video and creative assets.

Hasbro and TerraCycle have teamed up to launch a toy and game recycling pilot program. During the pilot program, consumers can collect and send their well-loved Hasbro toys and games to TerraCycle, which will recycle them into materials that can be used in the construction of play spaces, flower pots, park benches, and other innovative uses. In 2018, Hasbro is piloting the program in the contiguous U.S.
In honor of Earth Day on April 22, consumers in the contiguous U.S. can visit www.hasbrotoyrecycling.com to sign up for the free recycling pilot program . Once participants sign up, they can collect and box up their toys and games, print out a free shipping label and send their box to TerraCycle, who will sort and recycle the products. The pilot program is open to all Hasbro toys and games.

Bulldog Licensing has been named the licensing agent for the Moose Toys’ Pikmi Pops. Pikmi Pops is the collectibles toy brand that features scented plush animal characters packaged in lollipop-shaped containers along with exclusive keyrings, stickers, bands, and more.

The collection of 23 pieces includes art, decorative accessories, and accent furniture showcases Yearwood’s style inspired by her Southern roots.
The Trisha Yearwood Collection is priced from $9.99-$299.99.