Tori Vega (Victoria Justice) is a new student at the prestigious performing arts high school Hollywood Arts. Tori feels out of place among the talented students. But with the help of her older sister and new friends, Tori realizes she was born to perform.

Nickelodeon’s Victorious has been performing well, too, since its April 2010 launch. The live-action comedy series has been No. 1 in its timeslot with tweens 9–14 and teens 12–17, reaching 15.1 million tweens and 11.4 million teens each quarter, according to Nickelodeon. The second season of Victorious is underway, but fans won’t have to wait each week for the next episode to find out what’s going on with the show’s characters.

Victorious’ companion website TheSlap.com is a social networking and community site that is used by the characters in the series. Outside of the show, TheSlap.com allows fans to access characters’ profile pages, including uploads (photos, videos, blogs) from the characters and status updates. Fans can comment, take polls, and play show-themed games.

Nickelodeon Consumer Products has also put together a licensing program that encompasses everything from toys and video games to apparel and electronics. The first Victorious products launched exclusively at Walmart stores in the U.S. and Canada this month. More than 250 Victorious-themed products, including apparel, accessories, entertainment, and school supplies from a variety of licensees, will be available at Walmart stores during a special back-to-school window from now until September. Columbia Records/Nickelodeon will release a soundtrack album on August 2 that features music performed by the series’ ensemble cast. Spin Master is the master toy licensee for the brand and will launch dolls, playsets, and roleplay items in October. More licensed products will hit store shelves this fall, giving Victorious fans more ways to become a part of Hollywood Arts High School. 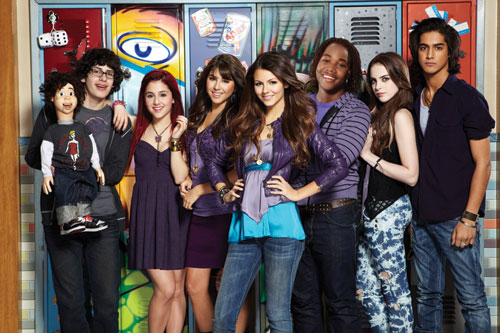