Abby Cadabby has been part of the Sesame Street character lineup since 2006. The character continues to grow in popularity and even has her own CGI-animated segment on Sesame Street called “Abby’s Flying Fairy School.” Maura Regan, senior vice-president and general manager, global consumer products, Sesame Workshop, updated aNb Media on this fairy friend.

Maura Regan: Abby and an eclectic gang of new friends—fairies, trolls, and a gerbil called Niblet—attend the Fairy School led by Ms. Sparklenose. Together, Abby and her friends Blögg and Gonnigan learn that magic alone isn’t the answer. It takes rhyme and reason and a helping hand (or wand) from our viewers at home to guide our Muppet fairies through their preschool dilemmas. “Abby’s Flying Fairy School” airs within Sesame Street in the U.S. Internationally, it’s a stand-alone series.

L.L.: Why did Sesame Workshop decide to give Abby her own segment and why create it in CGI? 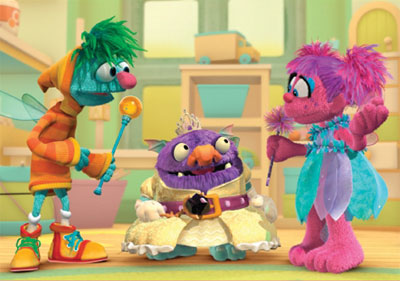 M.R.: She’s been on Sesame Street since 2006 and engages, delights, and encourages children, especially young girls, to try hard no matter what. Based on the success of “Elmo’s World,” we knew creating a dedicated character segment could work. As Abby gained traction, we developed a line extension based on her growing popularity.

L.L.: Will there be licensed product based on Abby’s CGI look?

M.R.: We are developing great product for Abby and, down the line, we will develop a program based on the segment much like what we have done with “Elmo’s World.”

M.R.: All of our licensees get Abby as part of the Sesame Street license, and we’ve already seen some terrific product. Abby is the No.1 seller for Gund. Children’s Apparel Network, K’nex, Hasbro, and Mattel all have Abby product. She’s at Sesame Place, at Sesame Street Live, and on DVDs. She’s everywhere you’d expect her to be. She’s a positive role model and brings an exciting dimension to Sesame Street content. Kids in Mexico, Japan, and Australia have already fallen in love with her. Stay tuned because you’ll hear much more about our favorite fairy-in-training.