In 16 Wishes, Abby, who just turned 16, receives a magic box of birthday candles from a fairy godmother—well, magical exterminator may be a more accurate description. In any case, each candle corresponds to a list of 16 wishes she compiled as a little girl. The list features things most young girls wish for: to have the cutest clothes in school, get a driver’s license, have a red car, be popular, and stay out late, among many other cool options. Each time Abby lights a candle and blows it out, one of her wishes comes true. But as the old adage goes, be careful what you wish for.

The made-for-TV movie will air globally on the Disney Channel starting June 25. Co-produced by MarVista Entertainment and The Walt Disney Company, it stars Debby Ryan, who is poised to be the next break-out star for Disney. She currently stars in Suite Life on Deck on the Disney Channel. Co-starring with Ryan is Jean-Luc Bilodeau. He plays Abby’s best friend-turned-romantic interest, Jay. He currently stars as Josh Trager on ABC Family Channel’s Kyle XY. 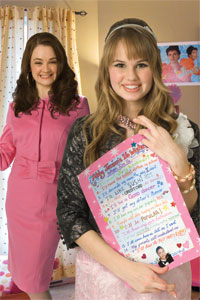 While the movie’s tween girl target can identify with Abby’s birthday wish list, parents will approve of this movie’s message of being true to yourself and being thankful for friends and family, among other positive impressions.

Numerous licensing deals have been signed and product will launch exclusively with Borders. Products include the 16 Wishes soundtrack. It will also be available on iTunes.com and is distributed under the MarVista Entertainment label by Brody Distribution Group (BDG). BDG is distributed by RED Distribution, LLC (a division of Sony Music Entertainment). There will be T-shirts from Now & Zen Productions; calendars from Harry N. Abrams; necklaces and key chains from Gloria Duchin; magnetic and classic bookmarks, journals, and a 110-page junior novelization from Ink Media; a light-up journal from Spark Studios; posters from Aquarius; and bracelets from Jac Vanek, with a percentage of proceeds going to RockCANRoll, a hunger relief organization gathering food donations through concerts, school events, and corporations. The film’s DVD is expected to be released this fall.

“Borders has really stepped up,” says Newman. “It’s not only the prime real estate at store level, but Borders will also play an integral part in the marketing of the film including an appearance of key cast members Debby Ryan and Jean-Luc Bilodeau at a flagship store in Los Angeles the week prior to the premiere,” he says. “Borders will also be featuring monitors in a significant amount of stores where music videos, clips from the film, and a trailer will be showcased through the end of July.”

The goal, for all parties involved, is to turn this film into an evergreen franchise.