Magic: The Gathering is integrating offline and online play through video games and in-store events. It has brought new fans into the game and re-ignited interest with past users. Paul Levy, brand manager, Magic: The Gathering at Wizards of the Coast, explains this integration through the release of Duels of the Planeswalkers 2012 and Magic 2012 Core Set.

Nancy Lombardi: Please explain Duels of the Planeswalkers and Magic 2012 Core Set. How does each work by itself? How can the two work together? When will each be released? How does this merge the online and offline experience of the game play?

Paul Levy: Magic: The Gathering is the first and most widely played trading card game with more than 12 million players and fans in more than 70 countries worldwide. This year, Wizards of the Coast (WOTC) introduces Magic 2012 with Duels of the Planeswalkers 2012 and Magic 2012 Core Set. Duels of the Planeswalkers 2012 is a digital version of our paper game, which was released on June 15 for XBLA, PSN, and PC via Steam. Magic 2012 Core Set is the perfect way to play Magic face-to-face with actual cards, and will release on July 15. These releases were built together to make a seamless digital and analog experience for our Magic communities, and culminate in one big event this summer—Magic Celebration.

N.L.: What is the Magic Celebration?

P.L.: With Magic 2012 we are really integrating our digital and analog offerings for the first time with Duels of the Planeswalkers 2012 and Magic 2012 Core Set. Magic Celebration will bring those players together on September 10 at Wizards Play Network (WPN) locations around the globe in an event unlike any other we’ve ever had. More information about the specific event details will be released later this summer. 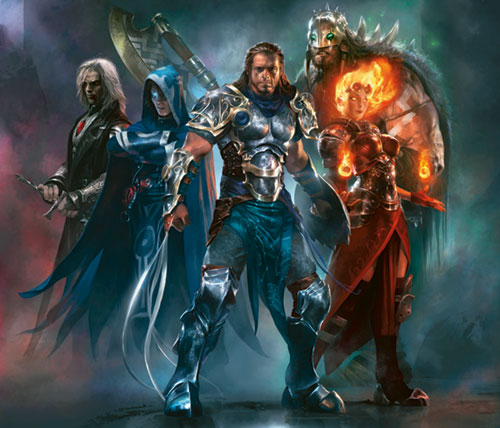 N.L.: When was the first video game for Magic released? What impact has it had on the brand?

P.L.: Magic has had a number of video game releases in the past (Shandalar, Battlegrounds), but our first big release for console games was the original Duels of the Planeswalkers in 2009. Duels of the Planeswalkers has been tremendously successful for Magic, bringing in new players and re-introducing old players back into the game. We’ve found that through the robust tutorial, Duels of the Planeswalkers is a great way for people to learn how to play Magic. As such, the Magic brand is experiencing record growth. We’re excited to bring the digital and analog audiences together for Magic Celebration at the end of the summer.

N.L.: Explain the long-term relationship that WOTC has had with hobby stores for events? How has this been strengthened by video games and the rise of social media?

P.L.: Wizards of the Coast has a very close relationship with our hobby retailers, making sure they have the tools and information necessary to support their play communities. Creating those strong communities and great in-store play experiences is the No. 1 goal for our WPN program. After the launch of the original Duels of the Planeswalkers, we saw rapid and steady growth in the participation at events, and the overall Magic business. Social media, by nature, spreads the word about what people are doing. More people playing Magic means more people talking about Magic, and that kind of excitement is likely to get their friends interested in playing too.