Beginning July 27 and running through August 12, sports fans around the globe will turn their attention to London for the 2012 Summer Olympics. And whether you are rooting for your favorite swimmer, gymnast, volleyball player, or cyclists, all U.S. fans can don Team USA gear in support.

Jennifer Lynch: Since the last summer Olympics a lot of changes have taken place within the U.S. Olympic Committee. What have been some of the biggest changes and challenges particularly leading up to next month’s games?

Peter Zeytoonjian: We opened our New York marketing office in the fall of 2009 and we quickly went to the Games in Vancouver. We’ve had a lot more time to prepare for London. The Summer Games are definitely bigger than the Winter Games, so the magnitude of the work that goes into preparing increases exponentially, because they are bigger and there are more sports involved. We’ve updated our brand mark and marketing message for the upcoming games, which you’ll start to see pretty much daily now. 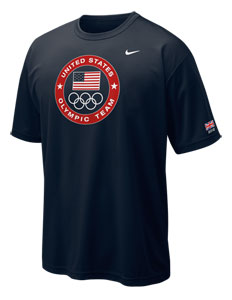 [Editor’s note: After the 2010 Olympic Winter Games, the USOC restructured the brand to focus more on the Olympic and Paraolympic athletes under the Team USA banner as opposed to the committee. This goes along with the USOC’s mission: “To support U.S. Olympic and Paraolympic athletes in achieving sustained competitive excellence and preserve the Olympic ideals, thereby inspiring all Americans.”]

J.L.: What kind of factors went into the redesign?

P.Z.: We switched from an event-based logo that we changed every year, for every set of games to a standard logo that would be used, in theory, in perpetuity to create a cohesive look and asset for Team USA and our Olympic athletes.

J.L.: Are there key aspects or licensing categories you are focused on now for Team USA?

P.Z.: With our sponsor Nike, our outfitter Ralph Lauren, and our new partner Outerstuff, we have product in basically every channel of retail for apparel, which is something that we didn’t have during the last summer games. This means we’ll have product in every mall across the country this year at different tiers. We’ve also extended our partnership with Oakley as the official eyewear supplier of Team USA through 2020.

J.L.: Do you try to create partnerships that sustain for both summer and winter games?

P.Z.: The underlying principle is that we give rights for four-year cycles. So the cycle we are in right now runs from 2008 through 2012. But there are always changes with some of the deals.

J.L.: In terms of a deal such as the one with Topps for trading cards, with so many athletes, how do you select athletes to highlight through licensing?

P.Z.: We try to make sure that we have a good representation of the marquee athlete and the up-and-coming athlete as well as the big sports and some of the smaller sports.

J.L.: Do fans prefer the classic categories or is there more of a leaning toward innovative/tech-based products?

P.Z.: We don’t have athlete rights so we don’t do any athlete product in apparel at all. However, whatever we are putting on the athletes or gifting the athletes is the same product that goes to retail for the consumer. It’s really about Team USA and the U.S. Olympic Team. People definitely have a thirst for the product and supporting the national team. I think there is a combination of traditional and innovative products because we have a selection of licensees and partners that offer the best of their categories. Ralph Lauren is a little more traditional, Nike is more technical and forward-thinking in terms of apparel’s functionality, and then Outerstuff is more fan-geared.