What started as an interactive retail store experience in 2007 with the first Ridemakerz build-a-car workshop in Myrtle Beach, S.C., has successfully crossed over into the mass-market with the introduction of the Xtreme Customz product line this past holiday season. Now Ridemakerz is set to expand its line of Xtreme Customz further in 2013 with distribution at Target beginning this spring as well as the addition of new bodystyles plus stand-alone accessory kits.

Nancy Lombardi: For those who are not familiar with Ridemakerz, explain the background of the company.

Lisa Materazzo: In May 2007, Ridemakerz opened its first store at Broadway at the Beach in Myrtle Beach, S.C. Inspired by the Build-A-Bear Workshop concept and America’s love of car culture, Ridemakerz provided an exciting opportunity for kids of all ages to immerse themselves in a one-of-a-kind, creative experience by building and customizing their 1:18 scale car.

We currently operate four company-owned stores (see the locations below) and have recently translated our build-and-customize play pattern into a “pre-packaged,” smaller-scale product available for mass market distribution. Our new Xtreme Customz line can now be found at a variety of retailers, including Target and Toys “R” Us.

The company-owned stores are as follows:

N.L.: Explain the concept of the product line and what age group it will target?

L.M.: The concept of the new Xtreme Customz line is very similar to what we have in our company-owned stores, which is focused on unleashing a child’s creativity through building and customizing. The sets allow kids to utilize interchangeable, easy-to-assemble snap-on kits. We liken the concept to a modern-day version of a classic model car kit for kids ages 5 and up.

N.L.: How do you get the word out to consumers?

L.M.: We launched a national television ad campaign on March 4, which will run through March 25 on Cartoon Network, Nicktoons, The Hub, and Disney XD. The 15- and 30-second spots are designed to raise awareness during the pre-Easter selling season. It’s the first time in company history that we have done a TV advertising campaign.

In addition, we are getting the word out through social media and other digital initiatives as well as public relations and engagement marketing, in the form of in-home parties. We are also cross promoting Xtreme Customz in our company-owned stores as these customers are our most passionate brand advocates.

L.M.: Yes, the two product lines are different. The company-owned stores and the Ridemakerz.com site offer 1:18 scale cars with the ability to add radio remote control. The offering is “a la carte” with the consumer having the ability to select every single part that goes on their car. A completely built car starts at $18. 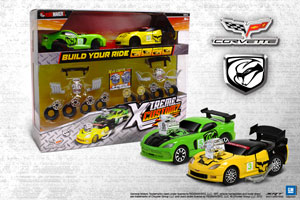 The mass market line, which is available in Target, Toys “R” Us, and many other locations are different scales, including 1:48-scale cars that are about the size of a smart phone. These cars are pre-packaged with accessories. Additional accessories are available in themed accessory packs. The price points in this line range from $3.99 to $29.99.

N.L.: What licenses is Ridemakerz currently featuring? In what way, does the license change the age group you can target (aside from the obvious)? For example, do you see men taking an interest as collectors with the appropriate license? How would that set differ from a “toy set” for a 6-year-old boy, for example?

L.M.: In addition to our Ridemakerz-designed Ridez, such as our police car and commander truck, we offer the following licensed properties in our Xtreme Customz line.

• Marvel for Spider-Man, Venom, and Iron Man
• DC Comics for Batman and Joker
• Dodge for Viper
• Ford for Mustang
• General Motors for Camaro and Corvette

Our licenses allow us to appeal to a variety of consumers—both those who are car enthusiasts and those who are action/adventure/superhero enthusiasts. It’s actually less about demographics than psychographics. The entertainment properties do provide the additional benefit/exposure of capitalizing on movie launches even though the kits are not movie specific. For example, we are very excited to monitor sales of our Iron Man sets as we approach the debut of Iron Man 3 in May.

In our specialty stores, we have a strong and loyal adult male buyer. These are often car enthusiast collectors who are either building a car on their own on in conjunction with their son.

For both business units (the mass line as well as our company-owned stores), we continually look for ways to refresh our lineup either through new decos/color schemes or all new licenses. In that regard, we are very much like a real-world automotive company.