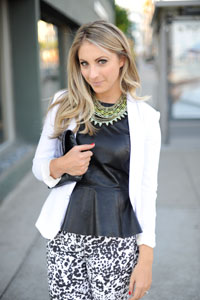 Since its launch more than four years ago, Cupcakes and Cashmere has experienced explosive growth (more than five million page views per month) and has gained a very loyal following (more than three million unique visitors).

Cupcakes and Cashmere has collaborated with several leading fashion and beauty brands including Forever 21, Juicy Couture, Style Mint, Coach, (in which Schuman designed a bag) and she is currently the exclusive guest blogger for Estee Lauder.

Ross Misher, CEO of Brand Central, said in a statement, “We are confident there will be pent up demand for Cupcakes and Cashmere branded products that deliver Emily’s point of view in a variety of categories. We see Emily as ‘Martha Stewart meets Carrie Bradshaw for the Millennial Generation.’ Emily reflects a paradigm shift in how this generation consumes media and lifestyle advice, tips, and guidance versus TV and magazines in the past. Brand Central is and will continue to be the leaders in this exciting new media space.”

“Sears Holdings made progress in 2012 improving the profitability of our business, but we know there’s more work to be done in 2013,” said Edward Lampert, Sears Holdings’ Chairman and CEO. “Our focus continues to be on our core customers, our Members, and finding ways to provide them value and convenience through Integrated Retail and our Shop Your Way Membership platform. We have invested significantly in our online e-commerce platforms, our Membership rewards program, and the technology needed to support these initiatives.”

ShopSprout.com showcases designs featured in a range of Sprout-branded products, including tote bags, T-shirts, water bottles, and iPad and iPhone accessories. Also available are products including apparel, plush, puzzles, and DVDs based on Sprout’s original series including, Noodle and Doodle and Pajanimals, as well its newest series, The Chica Show.