Really Me follows the life of 15-year-old Maddy, an ordinary-turned-famous 10th grader who wins the ultimate contest of landing her own reality TV show. Middle-child Maddy has been overshadowed her entire life by her gorgeous athletic older brother, Brody, her genius little brother, Clarke, and her former NHL hockey star father, Ray. Now it’s her turn to shine. But Maddy quickly realizes the Cooper family will never be the same. With no privacy, an uptight producer, and a fridge-raiding camera guy, Maddy learns that being filmed 24/7 may not be as glamorous as she thought.

The two shows, based on original RHCB stories, will be jointly produced and financed by RHCSE and FME, with FME taking on worldwide distribution, licensing, and home entertainment rights. The initial focus for both properties will be for television broadcast, with scope to develop into additional areas including games and toys. Both properties will appeal to kids across a broad spectrum of demographics. The chosen titles are Fish Head Steve and The Amazing Adventures of Charlie Small.

Fish Head Steve is based on the Jamie Smart comic strip, originally published by David Fickling in the weekly children’s comic, the DFC. Fish Head Steve is a comedy-soap about everyday events in Spumville where, in a flash, the heads of the townsfolk have been mysteriously swapped for household objects and family pets.

Toy Industry Association (TIA) members voted to amend TIA’s bylaws to make the association a stronger and more inclusive organization. Full TIA regular membership will now be open to any company engaged in creating, manufacturing, importing, or selling toys in North America. The vote, along with the election of the TIA board of directors, took place at the association’s annual business meeting in New York City during Toy Fair. For the second consecutive year, the business meeting was open to both members and non-members of the Association.

Following the annual business meeting, members of the TIA Board convened briefly to elect a slate of officers, each of whom have been re-elected for another one-year term:

Members of the Executive Committee:

Fourth quarter and full year GAAP results include the following, which were excluded in the non-GAAP results above for 2009:

“We finished 2010 with robust sales that were ahead of plan,” said Stephen Berman, president and CEO, Jakks Pacific, in a statement. “We are pleased that we also achieved the top end of our earnings guidance, despite continuing cost pressures and product mix shift that affected margin on those sales. We continue to closely manage our supply chain and maintain momentum on the development and placement of our product lines for 2011, giving us cautious optimism for this year. Our 2011 portfolio has been well received and is broadly placed in virtually all retail channels. We are expecting to achieve growth this year, with the contributions coming from across all divisions, including roleplay toys, action figures, Halloween costumes, electronics, kids’ furniture, dolls, and more.” 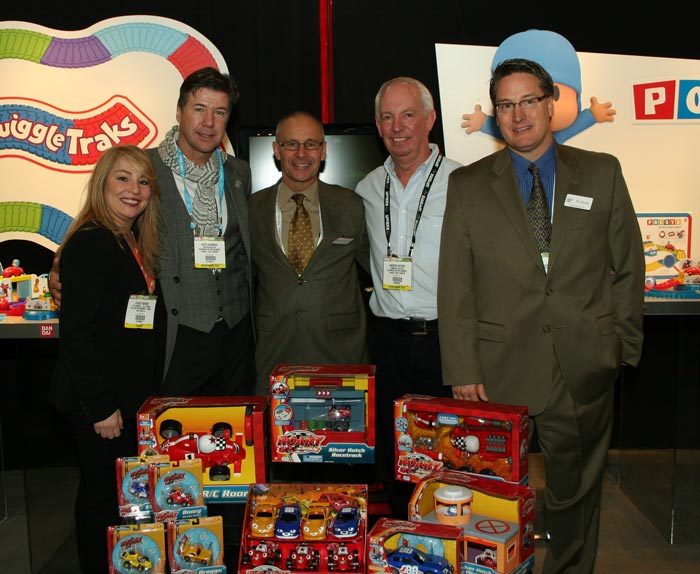 Roary the Racing Car will be available on store shelves for the first time in the U.S. early this year. Toy lines from Bandai and K’nex are in Toys “R” Us stores and Toysrus.com.

Roary’s first U.S. DVD, Roary The Racing Car, from Lionsgate Home Entertainment, will also launch at mass retailers in June. In addition, new television episodes will air on Sprout in April. Roary the Racing Car was created by Chapman Entertainment (creator of Bob the Builder) and is represented by HIT Entertainment in North America. The series is currently airing on 24-hour preschool channel Sprout.

Clifford’s Be Big Campaign Kicks Off

CBS Early Show co-anchor Erica Hill got a big hug from Clifford The Big Red Dog last Monday at the Scholastic Store in New York City. Hill and Clifford were on hand to celebrate the launch of Scholastic and HandsOn Network’s national Be Big Campaign, which encourages everyone to use Clifford’s Big Ideas to make the world a better place. For more information visit www.scholastic.com/cliffordbebig. Photo: Scott Rudd.