Mattel in Talks to Buy HIT

It has been widely reported that Mattel could buy HIT Entertainment from private equity firm Apax Partners for a reported $800 million. The deal could go through as early as this week. Apax purchased HIT in 2005 for $890 million, according to The Wall Street Journal. Mattel is currently a licensee of HIT’s Thomas & Friends brand with an extensive line featured under its Fisher-Price division.

Jakks Pacific, Inc., reported results for its third quarter and first nine months ended September 30, 2011. Net sales for the third quarter of 2011 were $332.4 million, compared to $348.7 million reported in the comparable period in 2010. Net income for the third quarter was $34.8 million, or $1.10 per diluted share, which includes $0.7 million, or $0.01 per diluted share, related to legal and financial advising fees and expenses in conjunction with the unsolicited indication of interest to acquire the company. This compares to $40.4 million, or $1.23 per share, which included a tax benefit of $5.9 million, or $0.17 per diluted share reported in the comparable period in 2010. Gross margins held steady year over year and operating margins expanded 30 basis points with decreases in operating costs though offset in part by the legal and financial advising fees incurred in 2011.

U.S. and Canada segment net revenues declined 7 percent to $764.6 million compared to $825.5 million in 2010; however, the company’s products experienced an 8 percent increase year-over-year in point-of-sale at the top four U.S. accounts. The reported results reflect growth in the Preschool category, which was offset by declines in the Boys, Girls, and Games and Puzzles categories. The U.S. and Canada segment reported an operating profit of $128.8 million, compared to $158.8 million in 2010.

The company’s debt-to-total-capital ratio was 33 percent. Consistent with the seasonality of the business, net cash flows used for operating activities were approximately $322 million in the first nine months of 2011, a decrease of $106 million, compared with a use of approximately $428 million in the same period in 2010.

Cash flows used for financing and other activities were $586 million in the first nine months of 2011, compared to cash flows from financing and other activities of approximately $361 million in the same period in 2010, primarily reflecting increased debt repayments consistent with scheduled maturities, dividend payments, and increased share repurchases in 2011, as well as the issuance of $500 million of senior unsecured notes in the third quarter of 2010.

During the third quarter of 2011, the company repurchased approximately 6.6 million shares of its common stock at a cost of approximately $173 million.

Third quarter worldwide gross sales for the Fisher-Price Brands business unit, which includes Fisher-Price Core, Fisher-Price Friends, and Power Wheels brands, were $748.9 million, up 1 percent versus the prior year, primarily driven by sales of Infant products.

Third quarter gross sales for the American Girl Brands business unit, which offers American Girl-branded products directly to consumers, were $87.6 million, up 4 percent versus last year, primarily reflecting sales of products related to Kanani, the 2011 Girl of the Year.

The Mattel Board of Directors authorized the company to increase its previously announced share repurchase program by $500 million. The share repurchase program is one component of the company’s capital and investment framework, which was announced in February 2003. Under the program, Mattel has repurchased approximately 144.7 million shares of its common stock for an aggregate of approximately $3 billion.

Fresh on the heels of opening its flagship Paul Frank stores in China, Saban Brands has secured a promotional agreement for the Paul Frank brand with 7-Eleven convenience stores throughout Hong Kong.

The nine-week Paul Frank promotion kicked off in Hong Kong’s 7-Eleven stores on September 21 and will continue through November 22, 2011.

7-Eleven stores in Hong Kong are projected to distribute more than one million pieces during the nine-week event. 7-Eleven stores are also using special in-store displays and posters to promote the Paul Frank promotion and are also advertising the promotion on billboards, public trains, outdoor, and social media.

Saban Brands opened the doors to its flagship Paul Frank store in China at the Joy City Mall in Xidan, Beijing on September 9, 2011. 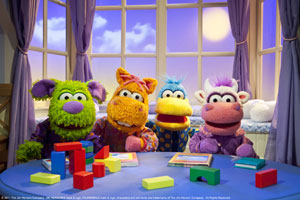 The Jim Henson Company has appointed TOMY International (formerly RC2/Learning Curve Brands) as the master toy licensee in the U.S. for its Pajanimals brand and characters. Under the terms of the multi-year agreement, TOMY International will develop an assortment of innovative and comforting toys and juvenile products for the U.S. market. Among the Pajanimals’ products and merchandise to be developed are plush, nighttime projectors, monitors, nightlights, nap mats, and playmats for an anticipated delivery date of spring 2013.