Jakks Pacific and tech company NantWorks LLC have entered into definitive agreements to create the joint venture company DreamPlay Toys LLC to develop, market, and sell toys and consumer products that incorporate NantWorks’ proprietary iD (iDream) image recognition technology. The agreements grant Jakks exclusive rights to use the iD technology with its products and to license its use to other toy companies.

The technology enables consumers using a smart phone or tablet device to instantly link the physical toy to video content, animation, and interactive game play with NantWorks’ downloadable iD Browser app. Jakks plans to introduce a broad product line, which will combine this technology with new content. The new toy line is expected to debut at next month’s unofficial “Toy Fair” in Los Angeles and at the Consumers Electronics Show in Las Vegas in January 2013. Jakks will be responsible for the development, marketing, sales, and distribution of toy products using NantWorks’ iD (iDream) image recognition platform.

DreamPlay will extend image recognition technology to non-toy consumer products and applications, and, pursuant to their agreements, Jakks’ CEO Stephen Berman will act as general manager of DreamPlay and Jakks will provide other resources, including other personnel and facilities for DreamPlay’s business.

Nelvana Enterprises finalized a deal with Discovery Kids Latin America for the broadcast of the CG-animated preschool series Mike the Knight. The series is set to air on the network in Spanish and Portuguese throughout the Latin American region in the coming months. The series currently airs on major broadcasters in the U.S. (Nickelodeon and Nick Jr.), Canada (Treehouse), UK (Cbeebies), Australia (ABC), and France (TF1). It will also launch in more than 20 additional territories soon. Nelvana represents Mike the Knight for broadcast and home entertainment in Canada and France and for broadcast in the U.S. and Latin America, while HIT Entertainment represents the property in all other territories globally. 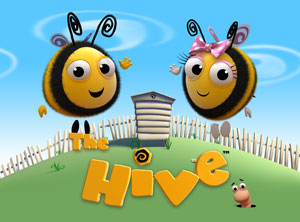 Bejuba! Entertainment, the distribution company for the preschool property The Hive, announced that the show will launch on Disney Junior in the U.S. this month. The Walt Disney Company acquired the cable and satellite rights to the show in all territories, excluding Australia and Israel.

The Hive is a CGI-animated series from The Hive Enterprises, Ltd., produced by Lupus Films, Monumental Productions, and DQ Entertainment, and made with the support of the MEDIA program of the European Union. The 26-episode half hour series follow the exploits of Buzzbee, Rubee, and the rest of the Bee family, who live together in the hive. Storylines explore themes such as working together to solve problems, being part of a diverse community, and valuing family and friendships.