Toys “R” Us, Inc., reported its comparable store net sales and total sales for the month of December 2012.

“We believe our December sales were impacted by softness in the overall markets for videogames, electronics, and toys, and by the uncertain economic environment in the U.S. and abroad,” said Jerry Storch, chairman and CEO, Toys “R” Us, Inc., in a statement. “Our team focused on optimizing margin, operating efficiently, and managing inventories during a period when the market and competitive intensity offered constrained sales opportunities. Additionally, the team innovated with programs to benefit the consumer, including driving a more integrated shopping experience between our e-commerce and store businesses through our enhanced internet and omni-channel capabilities. Moving forward, we are committed to accelerating distinctive services for our customers both on the internet and in our stores, and to driving differentiation in our product assortment.”

Internationally, in December comparable store sales declined 3.5 percent and total sales decreased by 4.1 percent, including a 1 percent unfavorable impact from foreign currency translation. Strength in Canada, China, and Southeast Asia was offset by economic weakness in Europe and Japan. 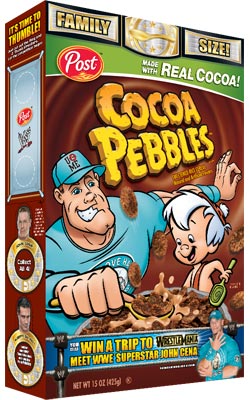 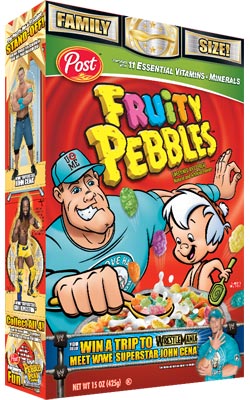 For a limited time, starting yesterday, WWE Superstar John Cena and Bamm-Bamm will replace Fred Flintstone on the front of more than eight million Post Fruity Pebbles and Cocoa Pebbles cereal boxes as part of a promotional partnership between Post Foods and WWE.

Pebbles Cereal, WWE, and John Cena started their partnership in 2012 after WWE Superstar Dwayne “The Rock” Johnson teased Cena about the brightly colored ring gear he wore, saying Cena looked like he was “running around like a big bowl of Fruity Pebbles.” This led to fans chanting “Fruity Pebbles” in arenas whenever Cena would enter the ring.

In January 2012, Post printed more than three million Fruity Pebbles cereal boxes featuring Cena, including a sweepstakes to meet the WWE Superstar. Partnering with John Cena to communicate the powerful taste of Fruity Pebbles cereal resulted in the highest redeeming on pack promotion in recent Post history, according to the company. In addition, Post has developed several other related marketing initiatives for this year.