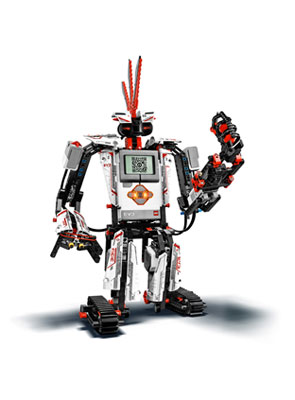 The LEGO Group announced the introduction of LEGO Mindstorms EV3. This is a new platform for consumer robotics designed to introduce a younger generation to building and programming robots while adding new flexibility for its existing fan base. Unveiled this week at the Consumer Electronics Show (CES) in Las Vegas, it will be available this summer with an MSRP of $349.99

The entire Mindstorms system is powered by the new EV3 Intelligent Brick. Stronger and faster with more memory and a larger processor, the EV3 Intelligent Brick now un-tethers robots from the computer by providing users expanded on-brick programming and tighter integration with smart devices. A new infrared sensor will give builders more control over their robots than ever before, adding more personality to the robot as it follows the builder or other devices.  New Linux-based firmware, a USB port, and SD expansion slot will offer nearly unlimited programming and expansion capabilities. Additionally, LEGO Mindstorms EV3 will also include full iOS and Android compatibility out of the box.

At launch, it will include building instructions for 17 different robots. The LEGO Group has created a series of “modular builds” designed to help children begin programming and playing within minutes. Builders can then add LEGO Technic pieces, additional motors, or sensors to change the functionality of the robot. A “mission pad” included with the box adds a new element of game play and encourages children to compete against themselves in a series of obstacle courses for the robots they build and program.

Mindstorms EV3 is the first LEGO playset to incorporate 3-D building instructions, made possible through collaboration with Autodesk. A twist on The LEGO Group’s hallmark nonverbal, step-by-step building instructions, the new 3-D instructions app, powered by Autodesk Inventor Publisher, allows builders to zoom in and rotate each step in the building process, making it easier than ever to assemble even the most sophisticated robot.

In response to a growing demand from emerging markets, for the first time, Mindstorms will be released with native language editions for Russia, China, Korea, Japan, Spain, and Denmark in addition to the English, French, German, and Dutch language versions now available.

DreamPlay products will incorporate NantWorks’ iD image recognition technology, a recognition platform that accurately recognizes images, 3-D objects, voice, speech, data, live video, and more, with the capability to differentiate between millions of objects instantaneously. The integration of this technology with Disney characters enables the consumer to experience a seamless blending of the physical toy with new character-based content in the form of interactive games and animation right on their smart phone or tablet device.

The line is expected to launch at major U.S. retailers this fall and internationally in 2014.

Using NantWorks’ iD technology, apps will be developed for both iOS and Android devices, which will allow the consumer to access deep, content-rich experiences from their mobile and tablet devices without the need for any type of QR code.

Disney will be granted exclusive rights to utilize the DreamPlay technology in the toy space along with select entertainment characters and brands owned by Jakks, such as Monsuno.