Warner Bros. and WWE Studios announced they are teaming up to co-produce a Flintstones animated movie, which is scheduled to be released in early 2015.

“WWE is family-friendly entertainment, so partnering with Warner Bros. on a Flintstones/WWE project was a natural extension of our Scooby Doo deal,” said Michael Luisi, president, WWE Studios. “This new, animated feature allows us to showcase our brand with young fans and loyal Flintstones enthusiasts alike.”

Warner Bros. Home Entertainment will handle worldwide distribution on Blu-ray, DVD, VOD, and digital download. The film will be co-produced by Warner Bros. Animation and WWE Studios. WWE will utilize its extensive global reach through its television, digital media, and print assets to market the release of the film. 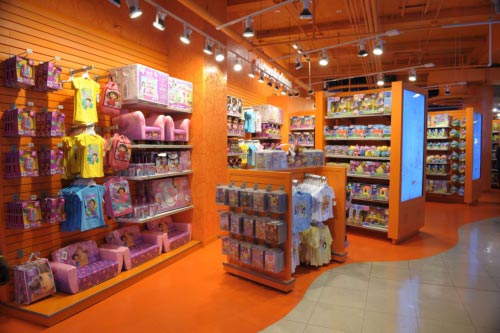 The Nick Shop’s orange walls and columns are covered with cutting-edge décor and stencils of characters from Nickelodeon’s animated series, with several interactive, touchscreen LED screens placed throughout.

The Clorox Company has just named The Joester Loria Group (TJLG) as its licensing agency for its Green Works brand in the U.S. TJLG plans to launch an integrated brand extension program for the Green Works brand across strategic categories including home appliances, lawn and garden, paper products, lighting, and other categories.