Stephen Berman, president and CEO, Jakks Pacific, Inc., said in a statement, “The positive momentum we achieved in our first quarter carried into the second quarter with sales results exceeding our expectations. Highlights for the second quarter included dolls, dress-up and roleplay in our Frozen line, Disney Princess dolls and dress-up, seasonal outdoor toys, foot-to-floor ride-ons and ball pits, and Disguise Halloween costumes among others, but we did see Frozen taking away sales from some of our other lines.”

Berman continued. “Looking ahead to our fall offerings, we expect the demand to continue at retail for our new Frozen dolls, dress-up and roleplay items, Disney licensed dolls, dress-up and roleplay including Princess, Fairies, and Sofia the First, Disguise Halloween costumes, and our preschool foot-to-floor ride-ons and ball pits. For Boys, we are looking forward to launching large-scale figures such as Teenage Mutant Ninja Turtles and Star Wars Rebels, new Hero Portal Plug It In & Play TV Games titles based on Power Rangers, Teenage Mutant Ninja Turtles, and DC Comics, and Nintendo plush and figures, and Max Tow Truck vehicles.”

Convertible Senior Note Issuance and Stock Buyback
The company recently completed the issuance at par of $115 million principal amount of 4.875 percent Convertible Senior Notes due 2020. The notes, which mature on June 1, 2020, are initially convertible at $9.64 per share. The company received net proceeds of approximately $110.4 million from the offering, of which $24 million was used to repurchase 3.1 million shares of the company’s common stock pursuant to a prepaid forward purchase contract and $39 million will be used to retire at par the company’s 2014 convertible notes maturing on November 1, 2014. The remainder of the net proceeds will be used for working capital and general corporate purposes.

The World Congress of Play returns this September to San Francisco featuring an impressive list of speakers (one of whom is TTPM’s own Chris Byrne) representing a large cross-section of what the organization calls the “play industry.”

Some of the speakers include:

Cra-Z-Art issued a statement saying that, “The United States Patent and Trademark Office (USPTO) issued a final decision in Cra-Z-Art’s favor concerning its challenge of Capriola Corp.’s U.S. Patent No. 7,731,558, which allegedly covered Capriola’s Laser Pegs products. The Patent Office held that all of the claims of Capriola’s ‘558 patent are unpatentable.”

Cra-Z-Art also said in its statement that, “it was sued in Florida federal court by Capriola Corp. and Laser Pegs Ventures, LLC, alleging that Cra-Z-Art’s Lite Brix building systems infringed the ‘558 patent. In response, Cra-Z-Art challenged the patent at the USPTO under its new Inter Partes Review proceedings, which resulted in a stay of the lawsuit.”

Cra-Z-Art says that, “The decision rendered by the Patent Office affirms Cra-Z-Art’s continuous position all along that Capriola’s ‘558 patent was illegitimately issued by the USPTO and that the lawsuit was completely without merit.”

In response to the above statement, John Capriola of Laser Pegs, says, “It is far from over. There are multiple issued patents and pending patent applications throughout the world covering aspects of Laser Pegs toys that are unaffected by the USPTO’s decision in the Inter Partes Review proceeding, including several additional pending U.S. patent applications for various innovative Laser Pegs features that were not even under consideration in that proceeding.” 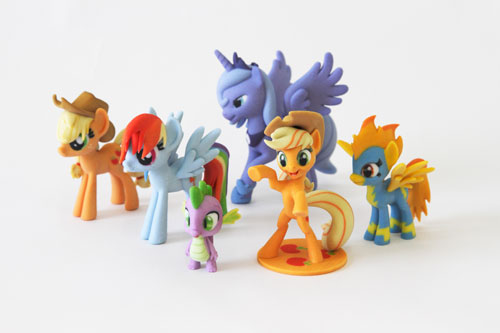 Hasbro, Inc., and Shapeways, the 3-D printing marketplace and community, announced earlier this week the launch of SuperFanArt, a website that enables fans, inspired by Hasbro brands, to showcase their artwork and sell their 3-D printed designs on Shapeways.

SuperFanArt will launch with the My Little Pony franchise. Additional Hasbro brands and artists will be introduced in the coming months.

TTPM is showcasing what’s trending in each specific product category. Today it’s Stuffed Animals. This trending list is determined by consumers. It’s the number of page views for that item in the previous 30 days and is updated every 24 hours.

The Passing of Karl Albrecht, Founder of Aldi

Karl Albrecht, co-founder of Aldi, passed away at age 94. Karl, along with his brother Theo, created discount mass-market shopping in post-World War II Germany. Read his obituary from The New York Times here. Theo Albrecht died at age 88 in 2010. Click here for more information about Theo.