“The positive momentum we achieved in the first quarter carried into the second quarter,” said Stephen Berman, CEO, Jakks Pacific, Inc. “We grew the topline, while improving margins and EBITDA. We have focused our product development and growth opportunities to be more global in nature resulting in our International division having a record quarter, and our Disney product lines continue to perform well around the world.”

Driving success in the second quarter was the company’s line of Frozen-licensed dolls and costumes, which performed well at retail, as did the Disney Princess and Disney Fairies product lines. Other contributors included the World of Nintendo toys ranging from figures and plush to vehicles as well as Max Tow and XPV brands of vehicles. Funnoodle, the seasonal water float, also performed well in the quarter.

In the second half of the year, Jakks says it is set to unveil several new products across a number of categories in time for the upcoming fall and holiday season. A few highlights include Sing-A-Long Elsa, the follow up to last year’s successful product; 3DiT! Character Creator featuring Marvel, Teenage Mutant Ninja Turtles, and DC Superheroes characters; Big Figs, entertainment-licensed large-scale figures based on Minions and Star Wars; new World of Nintendo figures; the Hulk Smash radio-control figure inspired by the popular Marvel character; a new large-scale Max Tow Truck Turbo as well as the Jumpin’ Little Monkey in the Animal Babies line and the Street Dogs radio control pup.

In June 2015, the board of directors authorized Jakks to repurchase up to $30 million worth of shares of the company’s outstanding common stock and/or convertible notes through open market repurchases or in privately negotiated transactions from time to time through March 31, 2016. No shares were repurchased during the second quarter. Approximately 377,000 shares of common stock were repurchased through July 20, 2015, at an aggregate cost of $3.4 million. 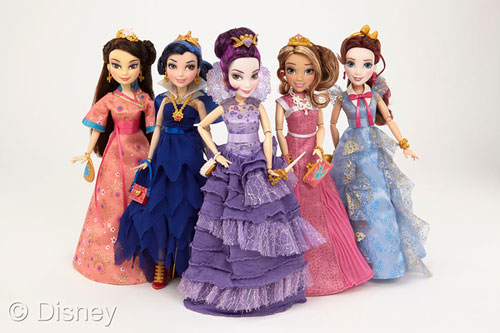 Disney Consumer Products unveiled a new product line inspired by Disney’s Descendants, which is set to premiere July 31 on Disney Channel. The live-action movie is a music-driven story, set in the kingdom of Auradon, which follows the sons and daughters of evil on their journey as they meet the children of goodness. The collection includes apparel, accessories, DIY beauty products, dolls, consumer electronics, and more from Hasbro, Jaya, Mad Engine, Innovative Designs, Markwins, KIDdesigns, as well as items from Disney Store. View the dolls from Hasbro on TTPM with more items to follow shortly.

What’s New in Barbie on TTPM

TTPM is showcasing Barbie. For the latest in toy reviews as well as what’s trending, visit TTPM.com.