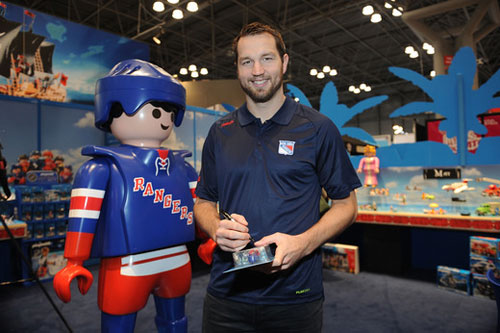 Playmobil unveiled new additions to its NHL playsets with the help of New York Rangers Rick Nash. The new line of figures, inspired by 12 additional NHL franchises, will be at retail this spring along with additional sets featuring NHL Rivalry Packs, the Stanley Cup Presentation Set, Score Clock with Referees, and an NHL Holiday Advent Calendar, which is due out this holiday season. The recent additions to the NHL line are an expansion of the Original Six line, which Nash helped unveil last fall.

Playmates Toys and DreamWorks Animation announced plans for a new toy line based on the new DreamWorks Animation series Voltron: Legendary Defender. This is a reimagining of the classic property featuring five teenage pilots and mystical robot lions, set to debut as a Netflix Original Series in 2016. Playmates Toys will serve as the master toy licensee and will create an expansive line of toys set to launch in spring 2017.

Uncle Milton was acquired by KCB Management in March 2014.

Playmates Toys announced the appointment of the Giochi Preziosi Group as its pan European marketing and distribution partner for the upcoming Ben 10 product range. In 2015, Cartoon Network named Playmates Toys the global master toy partner for its Ben 10 franchise, which includes an all-new reimaged animated series and full consumer products program. The global franchise has been a proven sales success led by top-selling toy, interactive and home entertainment franchises generating more than $4.5 billion in global retail sales to date. The series is scheduled to premiere in late 2016 internationally and in the U.S. in 2017.

Child’s Play Communications announced the addition of Schleich as a client. Founded 80 years ago, Schleich is one of Germany’s largest toy manufacturers. Hand painted and known for their exquisite detail, Schleich figurines are sold in more than 50 countries. Child’s Play will be responsible for media relations and influencer outreach among bloggers and social media personalities for Schleich in the United States.

Women in Toys, Entertainment, and Licensing (WIT) hosted a gala on Sunday night to honor women leaders at the 12th Annual Wonder Women Awards Gala, which celebrated 25 years of the organization.