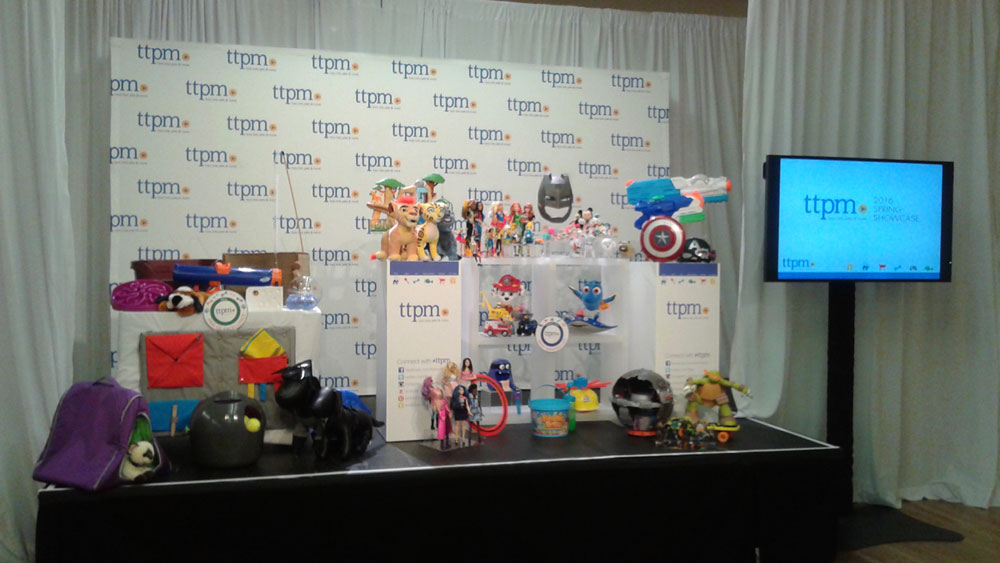 TTPM hosted its annual TTPM Spring Showcase in New York City today. The crowded one-day press event highlighted the top trends and innovations for spring and summer play. With the event falling on Bring Your Child to Work Day, this year’s guest list include more than 100 kids who spent the day playing. Here is what’s hot this summer:

• Summer Flicks Fill the Toy Aisle
Summer 2016 will feature some of the most exciting and memorable blockbusters of the year. Key movie properties include Captain America: Civil War, Teenage Mutant Ninja Turtles: Out of the Shadows, Finding Dory, Batman v Superman: Dawn of Justice, and The Secret Life of Pets.

• Toys for the Outdoors
Summer is all about fun in the sun. This year, kids will have access to a variety of new, exciting outdoor toys, including edible bubbles, ride-ons, scooters, and more. TTPM experts predict Candylicious Bubbles, the Nerf Super Soaker Breach Blast, Water Warriors Gargantua, Booger Balls, Wet Head, and the Aerobie Pro Flying Ring will be the hottest outdoor toys this summer.

• Summer Play for Pets
From chew toys to apparel and catnip to collars, families will have a variety of new toys, treats, and gear for their four-legged friends this summer.

NBCUniversal, a division of Comcast Corporation announced the acquisition of DreamWorks Animation. The studio will become part of the Universal Filmed Entertainment Group, which includes Universal Pictures, Fandango, and NBCUniversal Brand Development.

Following the completion of the transaction, DreamWorks Animation CEO and co-founder Jeffrey Katzenberg will become chairman of DreamWorks New Media, which will be comprised of the company’s ownership interests in Awesomeness TV and NOVA. Katzenberg will also serve as a consultant to NBCUniversal.

The acquisition gives NBCUniversal broader reach to a host of new audiences in the highly competitive kids and family entertainment space, in both TV and film. It includes popular DreamWorks Animation film franchise properties, such as Shrek, Madagascar, Kung Fu Panda, and How to Train Your Dragon. It also includes a thriving TV operation that is a significant supplier of family programming, with hundreds of hours of original, animated content distributed across linear and SVOD platforms in more than 130 countries. Additionally, DreamWorks Classics, a large library of classic characters, including Where’s Waldo and Rudolph the Red-Nosed Reindeer, will become part of the NBCUniversal portfolio, along with a successful consumer products business.

“Australia presents a strong growth opportunity for Spin Master and we’re excited to be expanding our network of regional business offices,” said Ben Gadbois, president and COO, Spin Master Ltd. “One of our core growth strategies is to continue to grow our international sales. Our new Australian subsidiary is an important step toward this goal,” he added.

Spin Master Australia will be based in Sydney, NSW, and a warehouse location will be finalized in the coming months.