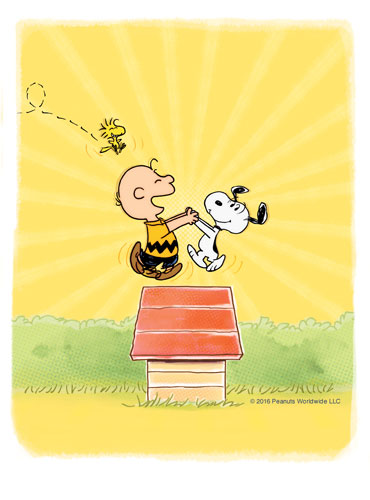 Peanuts, the new animated series, heads to Boomerang on Monday, May 9. Viewers will see individual Peanuts print comic strips come to life in vignettes. New episodes premiere daily at 11:30 a.m. ET/8:30 a.m. PT. Viewers will be able to catch a sneak peek of Peanuts on Cartoon Network the week of May 9 at 10:30 a.m. (ET/PT) and further engage with the series as select individual shorts roll out on the Cartoon Network video app.

Peanuts is produced by Normaal Animation under license from Peanuts Worldwide LLC.

Adaptoys to Help Those with Physical Disabilities

The Christopher & Dana Reeve Foundation, a nonprofit dedicated to improving quality of life for people living with paralysis, has announced the creation of Adaptoys, which are adapted versions of popular toys that allow people with physical disabilities to play.Adaptoys is bringing the power of play to the 5.6 million Americans living with paralysis by equipping toys with voice activation, motion sensors, and sip-and-puff (SNP) assistive technology.

Advertising agency 360i partnered with technology company Axios to create the initial Adaptoys prototypes. A remote-control car is powered by a headset equipped with a straw, into which users can exhale to cause the car to accelerate, or inhale to reverse. Motion sensors on the headset steer the car left or right based on the user’s head movement. And a voice-controlled pitching machine throws a ball on the user’s command, tossing pop-ups, groundballs, and strikes.

To bring accessible toys to more families nationwide, the Christopher & Dana Reeve Foundation, in partnership with 360i, has launched a crowdfunding campaign at Adaptoys.org to raise funds to support the research and development and cover production costs for at least 100 adapted remote control cars, which will be distributed to qualified recipients through a random lottery selection. The more successful the crowdfunding effort, the more toys will be produced and families will be reached.

Captain America: Civil War opens this Friday, May 6. TTPM is showcasing all the latest toys from the movie. For the latest in Toys, Tots, Pets, and More as well as what’s trending, visit TTPM.com.