The Chicago Toy & Game Group announced the nominees for the 2016 Toy & Game Inventor of the Year (TAGIE) Awards.

Rising Star Inventor of the Year

In addition to the public votes, honorees from closed categories, including Excellence in Character Design, Hassenfeld Family Humanitarian Award, In Memoriam, and Lifetime Achievement will also be awarded. The winners of this year’s TAGIE Awards will be announced on Friday, November 18, 2016, with a dinner beginning at 7pm in the Grand Ballroom at Navy Pier in Chicago.

Voting for the 2016 TAGIE Awards is open until November 1, 2016. Members of the media, industry, and public are invited to cast their votes for the best toy and game inventors by visiting www.chitag.com/tagies-nominations.

Tickets to attend the 2016 TAGIE Awards are available for $250 and require registration through chitag.com/tagies.

Award winners will be announced at the annual gala on Sunday, February 19, 2017, at Pier 60, Chelsea Piers in New York, during New York International Toy Fair. Tickets to the 2017 Gala are now available for purchase by clicking here. Nominations are now open:

The 2017 Wonder Women Award Categories include: 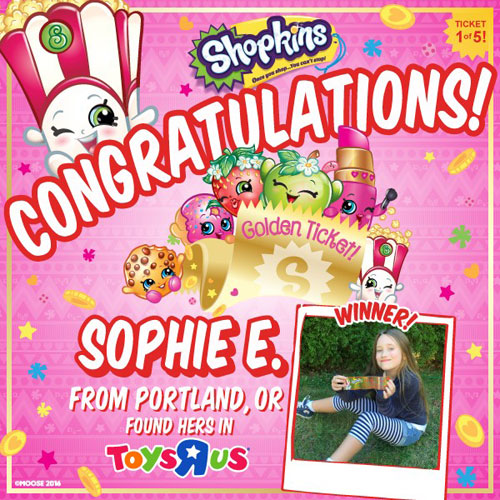 Portland, Oregon’s most loyal Shopkins fan, Sophie age 8, beat the one in 1.3 million odds and found the first of five Shopkins Golden Tickets hidden across the U.S. Moose Toys is sending Sophie and a guardian to the home of Shopkins in Melbourne, Australia, for a complete Shopkins experience. Moose Toys says that Sophie plans to take the trip and has until December 30, 2017 to travel.

After traveling more than 8,000 miles from Portland to Melbourne, Sophie and her guest will be greeted by their favorite Shopkins characters, and whisked off to their very own private Shopkins Party, where they will get to meet the designers from the world of Shopville. Along with a trip, Sophie will also receive the Ultimate Shopkins Backpack, jam-packed with some of the best Shopkins loot, including items that have never been released in the U.S.

The Shopkins Golden Ticket Hunt is a nationwide treasure hunt, which kicked off August 29 and will run until all five tickets have been found.

TTPM is showcasing newest Trolls Movie Toys. For the latest in Toys, Tots, Pets, and More as well as what’s trending, visit TTPM.com. The Trolls Movie opens November 4 in the U.S. See the trailer here.